Raising Two Puppies Will Be
Twice The Fun, Right?

Raising two puppies at the same time in the same household isn't a good idea and could be a recipe for disaster.  Understand the reasons why and if you're still truly determined to have two pups, here's how to survive the experience!

Two Puppies Can Be Problematic

Is raising two pups in the same household a good idea? 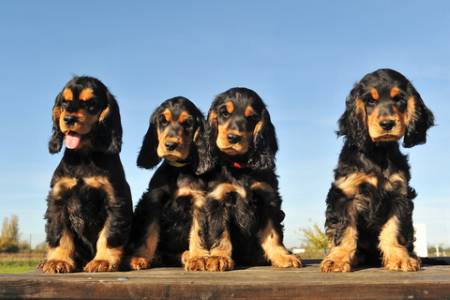 I'd like to pick two puppies out of this lineup, wouldn't you?

I'm often asked this question and my answer is always an emphatic NO!

Whether from the same litter or not, the answer is still the same.

Please don't do it because I guarantee you'll regret it, especially if you've never owned a puppy before!

Responsible cocker spaniel breeders won't ever sell more than one puppy from any litter to the same family and there are many good reasons why they shouldn't.

Read on to find out why owning two puppies at the same time can be problematic.

Why Owning Two Puppies is a Bad Idea 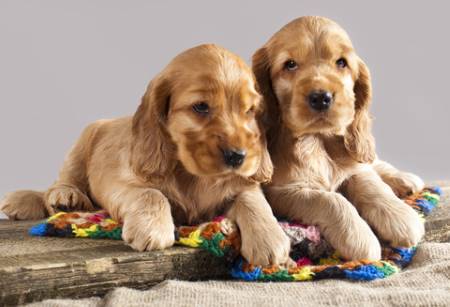 I hope the above reasons for not raising two puppies in one household have made you think twice and perhaps you're now having second thoughts.

However, if the above hasn't put you off and you still want more than one little bundle of fun, why not consider buying your second puppy when the first one is truly socialized and fully trained?

That way, you've a better chance of managing the second puppy and with a bit of luck your first puppy will teach the other some good manners.

If You Already Have Two Puppies And Need Help

If you've already bought two puppies and you're struggling with them and looking for guidance, the recommendations set out below may help you to put a stop to their mischief and mould your puppies into well-behaved, individual, adult Cocker Spaniels. 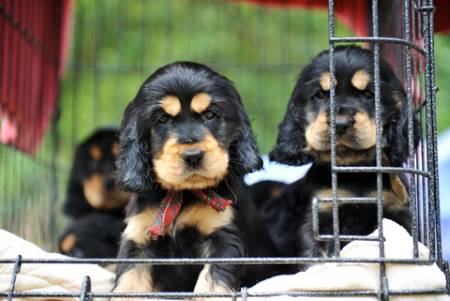 To state the obvious, your objective will be to raise two individual, well-socialized, well-trained, and well-mannered Cocker Spaniels.

It's thought that where puppies are raised together, their development falls short; individual attention will allow each puppy to develop to his full potential.

So it's important that the pups are kept apart for the first few months of their life. It's also equally important to give both puppies lots of individual attention.

Failure to do either of the above could result in two unruly, mischievous, un-trainable puppies that may develop behavioral issues later in their adult life.

I recommend you crate your two puppies, separately. I appreciate it can be expensive, but it's important that they can spend time away from each other to help avoid separation issues.

Place the crates next to each other at first, and then gradually move them apart until they're at separate ends of the room.

If you can move the puppies into separate rooms, even better. Your Cocker Spaniel pups will only rest and sleep in their crates. There will be plenty of time when they can be together and have 'supervised' fun!

If you've not yet crated your puppies, you'll find plenty of helpful advice on crate training your puppy here.

Feeding your puppies separately, preferably in different rooms, will help to avoid problems with food aggression. 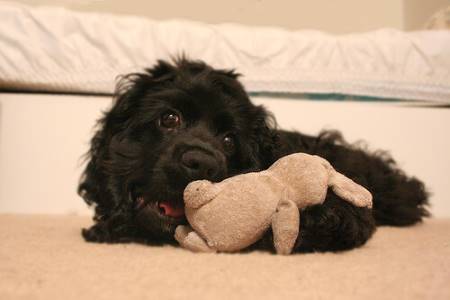 This is my favourite toy rabbit!

For example, if both puppies are fed side by side and one puppy finishes before the other, he may try to steal food from his sibling.

If this happens regularly, the other puppy will begin 'resource guarding' and will growl, snarl, snap or even bite, if he believes his food is about to be taken from him.

For obvious reasons resource guarding can become a very serious problem,  particularly if it's allowed to develop into adulthood. If that were the case, it would need to be addressed immediately.

Happily, issues of food aggression in dogs may never arise if the puppies are fed apart from each other.

The Pups Will Need To Be Socialized Separately

Effective and timely socialization is essential if your puppies are to grow up to be contented and happy Spaniels.

Each puppy must be given their own individual 'socialization time' to allow each one to concentrate on you and the socialization in hand, rather than on each other.

If each puppy isn't socialized properly, they may become easily frightened and confused by the simplest of situations, or noises, and become very nervous of their environment.

This 'fear' of most things around them can result in behavioural and aggression issues later on in life.

Socializing your puppy is a very important part of their development, don't miss it out!

Dogs learn from each other - bad behaviour as well as good behaviour - and unless you're an expert dog trainer you'll more than likely end up with two very mischievous puppies who aren't in the slightest bit interested in what you're trying to do!

It will be better for all concerned if puppy obedience training is given to each pup separately, but before you do, I recommend you read my advice on how to train a puppy to give you a few tips first.

Play With Each Puppy Separately

Of course your puppies should be allowed to play together, but keep an eye on them and separate them if play gets too rough.

Spend some time playing with each puppy individually to help them learn that you're fun to be around and for them to want to be with you (rather than always with each other).

Once you have their attention in this way and they've bonded with you, there's a good chance that they'll want to do as you ask. Result!

Exercise And Walk Your Puppies, Individually

Exercise and walk your puppies on their own, but also walk them together, as a pack.

Walking your puppies separately will make teaching them to walk nicely on the lead much easier and will also help each puppy to get used to his immediate environment without the distraction and/or intimidation of his sibling.

Take Your Puppies To The Vets Separately

When it's time to take your puppies to see their vet, for example, for their vaccinations or regular check ups, take them separately.

I appreciate it may be more convenient to take both at the same time, but what we're trying to do here is to treat each puppy as an individual and not part of a whole.

Allow A Natural Hierarchy To Develop

As you interact with your puppies, monitor their behaviour to see if a natural hierarchy develops between the two puppies. 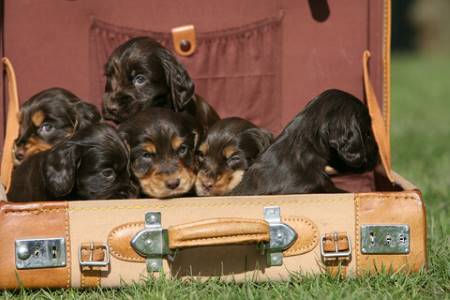 Step in to referee only when it's absolutely necessary, for example, when one puppy is being mercilessly bullied, or play is getting too rough.

Having said that, regardless of each puppy's status in the pack, both should view and accept you as their alpha dog!

When two puppies are raised together the dominant puppy will try to 'rule the roost' and may attempt to intimidate or bully, the subservient puppy.

When they're apart their own 'true' personality is likely to shine through.

I can't emphasize enough how important it is to keep the two puppies separated.

Separation will allow each pup to learn and develop at his own pace and for each personality to emerge naturally.

You won't need to keep your puppies apart forever, perhaps only for the first 8 - 12 months, just enough time to allow them to become well-trained, well-behaved, and fully socialized adults with a healthy respect for their human pack.

If you decide to go down the route of getting two puppies, I hope this helps and I wish you the very best of luck - enjoy them!