Puppy separation anxiety is fairly common. The good news is that you can do something about it by helping your puppy to feel more comfortable about being left home alone. Understand more about separation distress; learn how to diagnose it and what you can do to help your puppy get over his nervousness.

What Is Dog Separation Anxiety?

Dog and puppy separation anxiety is quite common.

It's a real fear of being left alone; of being separated from the pack, and when your puppy sees you getting ready to leave the house it can send him into panic mode. 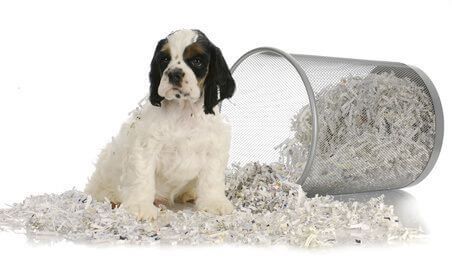 I was bored mum!

The good news, however, is that you can do something about it to help him feel a little more confident about being left on his own.

Puppies enjoy the psychological and physical comfort of belonging to, and interacting with a pack. They will often attach themselves to one person in particular, probably you if you're his primary carer.

He may follow you around the house, from one room to the next, (yes, even to the bathroom!) and rarely leave your side.

When Max was a puppy he would sit outside the bathroom door and cry until I'd open the door. There was no getting away from him!

He's much older now and I can safely leave him on his own for up to 8 hours and he's fine. Admittedly, I don't do that very often, but there have been times when there was really no other option.

This page will explain how to diagnose puppy separation anxiety so you can be sure you're treating the right behaviour,  how to prevent your puppy becoming distressed in your absence, and what you can do to ease your puppy's distress.

What Are The Signs Of Puppy Separation Anxiety?

All puppies show some signs of separation distress when left alone, and can become nervous, stressed and insecure. However, as they get older they should begin to feel more and more confident about being left on their own.

Signs that your puppy may be suffering separation anxiety may be as follows:

At this point, I'd like to emphasize that dog and puppy separation anxiety is not the same as boredom, although boredom can result in similar behaviours such as chewing, pawing, digging, etc.

Separation anxiety begins just before or as soon as you leave the house, whereas boredom doesn't usually kick in until they've been on their own for an hour or so.

Keeping your puppy occupied for that first hour may help him to relax and overcome his anxiety.

If your Cocker puppy follows you around all day long, I recommend you begin to do something about it now.  Teach him to be a little more independent, otherwise you're going to end up with one anxious dog when you need to leave the house!

Read on to learn how to get your puppy used to being left home alone.

How To Prevent Separation Anxiety In Puppies

To prevent puppy separation anxiety arising in the first place, I recommend from day one that you begin to train your puppy to be comfortable and happy when left on his own for some or part of the day. 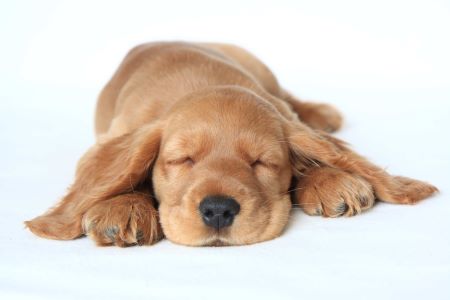 Teach him to be a little more independent.

As you practice daily, move around the house as you would normally.

If he gets up to follow you, take him back to where you left him and go back to what you were doing. If he barks while you're out of the room, don't return until he's quiet (a ten second break from barking will do) otherwise he'll learn that his noisy barking will get him what he wants.

Practice leaving him on his own often and gradually build up to longer periods of time. I promise you, it won't be too long before he gets the message!

If your pet becomes destructive as a result of his puppy separation anxiety, don't punish him.

Your puppy isn't misbehaving: it's not a training issue, he's simply responding to his fear of being left alone.

Try the following steps before you next leave him on his own, they should help to ease your pup's anxiety:

Before you leave your puppy for any length of time, tire him out!

Exercise him well, play with him, or do a few training exercises to use up some of his excess or nervous energy because he's much more likely to fall asleep if he's tired.

Keep puppy separation anxiety at bay by making sure he's dog tired (sorry for the pun!).

2. Feed Him Before You Leave

If the timing is right, why not feed him as you leave?

If he's busy eating he may not notice you've gone and if your puppy has a full tummy, he's more likely to fall asleep, contented, while you're away.

If you prefer not to feed him, or the timing isn't right, you could leave a couple of treats in his crate (such as liver nibbles or a couple of biscuits) to help him associate nice things with your leaving.

If your Cocker Spaniel is bored there's a good chance that he'll become destructive.

To avoid this, try leaving your puppy a selection of toys to keep him occupied. A good selection of safe, interesting toys to play with will help prevent separation anxiety in dogs.

Any toys or bones you give your Cocker to keep him occupied while you're away should be taken from him on your return. Only let him have them when you go out to make sure he doesn't get bored with them.

Rotate his toys regularly to will help stop him from getting bored with them.

Kongs are great for keeping a dog or puppy occupied as it helps to reduce puppy separation anxiety. They're very strong and can be filled with tit-bits of your pet's favourite foods such as sausage, liver, hot-dogs, kibble and a little peanut butter.

Whenever you give your puppy treats, don't forget to offset them against his daily food allowance otherwise you'll end up with a fat Cocker Spaniel!

A stuffed Kong or two will certainly keep your Cocker out of mischief for a while, keeping any problems associated with your dogs separation anxiety to a minimum.

I sometimes leave Max with an empty crisp packet (salt wiped clean) with a small teaspoon of peanut butter smeared inside. This is really fun to watch and it keeps him busy for ages!

You could leave the radio on to keep him company. Leave it on either a chat show or an easy listening channel, but keep it low key and it will help to keep him calm and relaxed.

The radio will also help to reduce any external noises that may otherwise have startled or frightened him, or triggered his barking.

4. Don't Make A Fuss When You Leave

When it's time to leave the house without him, don't make a fuss; don't say goodbye, and don't look at him or pet him. Just go!

Better still, try to leave without him knowing.

If you really can't resist it, and you feel the need to 'appease your guilt', say goodbye about fifteen minutes before you leave.

The more you fuss over him before you go out, the more anxious he will become.

You fuss over him, cuddle him, give him a treat and more cuddles (we do this to make ourselves feel less guilty about leaving him) and then we suddenly disappear, leaving him all alone.

By which time, he's probably so wound up and raring to go...and that's when the trouble starts; chewing, biting, and getting into all sorts of mischief and/or destruction.

It really is important that your pet is calm and tired (read 'happy/contented') when you leave, not stressed or anxious.

Also bear in mind that there are triggers that can set off puppy separation anxiety, for example, picking up your keys, mobile, handbag, coat, etc., as well as the little things you do before leaving the house, such as putting on your shoes or closing windows.

These predictable actions will let your puppy know that you're about to leave and he'll immediately become anxious and begin to fret.

You can help to desensitize puppy separation anxiety triggers by repeating them often but without leaving the house.

For example, put your coat on and then take it off several times in a row. Pick up your house keys a few times without actually leaving and locking the front door. Put your keys in your pocket. If your dog remains calm, praise him and give him a treat.

Try repeating this with other triggers so that he's no longer sure whether you're going out or staying in. Removing the clues to these triggers will help to keep him calm.

Crating can help to reduce separation anxiety in puppies as their crate can make them feel safe and relaxed; one of the many benefits of crating your puppy.

If you haven't already done so, I recommend you teach your pup the lie down and stay commands. Not only will they help you with your training sessions, lying down will help to calm him.

Use the commands before you leave the room for a few minutes and praise him if he's still in the same position when you return.

By practicing and following the tips on this page, your Cocker will become generally more relaxed and calm, and any signs of puppy separation anxiety should become almost non-existent.

However, if your Cocker doesn't showing any signs of improvement, despite all your hard work, I would check in with your vet to rule out an underlying health problem.

Not only will the vet be able to confirm that your Cocker Spaniel is fit and healthy, he may also be able to help you with your puppy's separation distress or recommend a natural health remedy to help calm him a little.

Related Titles You May Enjoy:

Understand more about separation anxiety, what causes it, symptoms, and tips on how to remedy separation distress.

Dealing With Your Dog's Separation Anxiety:

Learn how to teach your Cocker to manage better while he's left on his own. 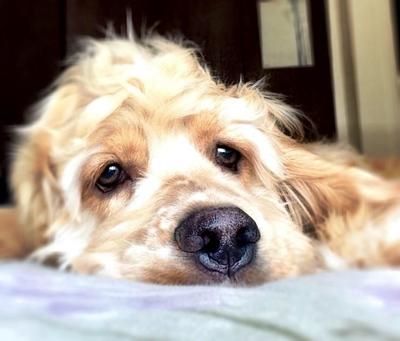