Drastically reduce the risk of cocker spaniel eye problems for your pet by learning to spot the early signs, and how to treat them before they get out of hand. Learn how to keep your precious little Spaniel’s eyes sparkling and healthy!

Many conditions could affect your pet's eyes during his lifetime. Some are hereditary others are caused by a virus, bacteria, poor hygiene, or allergens such as dust or pollen. 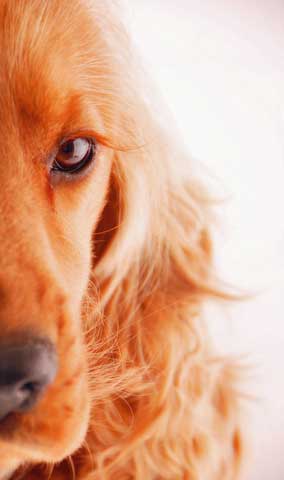 No problems with my eyes!

Listed below are Cocker Spaniel eye problems that may affect your pet, together with symptoms and a link to more detailed information on that particular issue.

Glaucoma is a condition where there is an abnormal increase in pressure inside the eye, which long-term, can result in irreversible blindness for your pet.

The inside of a normal healthy eye produces a clear fluid called aqueous humor, which nourishes the eye.

A healthy eye will maintain a balance of fluid and drainage, which helps to keep the correct pressure inside the eye.

Glaucoma occurs when there's a problem with drainage. It results in an increase in pressure inside the eye which causes the eye to bulge and can lead to eventual blindness.

Treatment can involve temporary medicines or surgery depending on the type of Glaucoma (primary or secondary), but your dog may still eventually lose his eyesight despite treatment.

Canine conjunctivitis (also known as 'pink eye') is an inflammation or infection of the conjunctiva - the membrane connecting the eyelid to the eyeball.

The conjunctiva can become irritated by an allergic reaction to pollen or grasses, or from infections caused by bacteria, fungi or a virus.

It's one of the most common Cocker Spaniel eye problems and apart from redness and swelling of the eyelid, symptoms include watery eyes or a yellowish-green discharge, squinting, and itching.

Your dog may paw at his eye or try to rub his face on carpets and furniture for relief.

Conjunctivitis in dogs caused by an allergy isn't contagious.

However, conjunctivitis caused by an infection may be contagious to other dogs so it's important to be strict about hygiene to avoid passing this on, especially if you have other pets in your home.

Your vet may prescribe antibiotic eye drops or ointment depending on whether the problem is the result of an allergy or an infection.

As far as canine eye problems go, this is probably one of the most painful.

Entropion is a condition where your dog's eyelid rolls inward, causing the eyelashes and hair to rub against the eyeball which can cause considerable irritation and pain, and long-term, quite a bit of damage to the cornea.

This condition normally affects both eyes at the same time and can be in upper or lower lids, but it's more common in the lower lids.

Where entropion is hereditary, puppies may be born with it or develop it within the first 12 months of their life, however it's more commonly seen in older Cocker Spaniels.

Treatment involves creams or drops for the eye to help with lubrication and pain but it won't cure the problem. A surgical procedure called blepharoplasty is the only effective treatment. 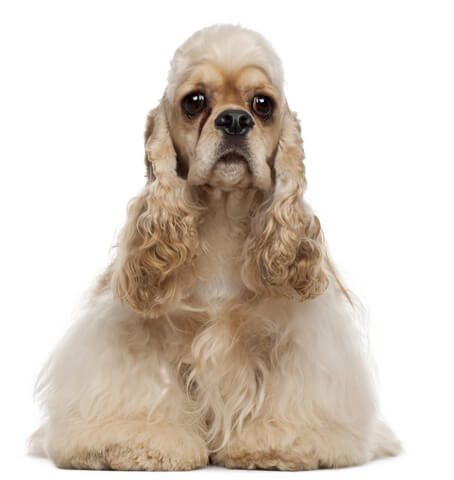 No Cocker Spaniel eye problems here, mine are shining!

Distichiasis is a condition where abnormal eyelashes (distichiae) grow from the oil glands of the dog's eyelid and cause irritation on the eyeball - ouch!

If the dog's hair is fine and soft there may be no visible symptoms; however where there is irritation, your dog's eyes may become red and/or inflamed and he may squint or try to rub his eyes with his paws to relieve the irritation.

There are several treatments available for Distichiasis and which one your vet chooses will depend on the severity of the dog eye problem.

The abnormal eyelashes may be removed manually, by surgery, or by using a form of electrolysis.

Surgery may be followed up with a course of antibiotics to prevent infection and to help clear up any ulcers or infection caused by the distichiasis.

Ectopic Cilia is similar to Distichiasis, but instead, the hair grows from the inner surface of the eyelid.

This condition can be very painful for your dog and can also cause corneal ulcers.

Your poor Cocker may paw at his eyes to try and relieve the irritation and/or pain.

Ectopic Cilia may be treated in the same way as for Distichiasis, ie the lashes causing the problem are removed, followed by antibiotics to control infection.

Eyelid tumours are usually found in middle-aged to older dogs and can be treated successfully with surgery; however if the tumour isn't removed while it's small, it can grow large and destroy the eyelid.

Conjunctivitis and discharge are common in dogs with growing eyelid tumours.

If your pet has a cataract his eye will appear cloudy and his vision may be affected.

You may notice that he has trouble seeing things properly and may begin to walk into otherwise familiar objects.

If cataracts are left untreated they will eventually lead to blindness; however cataracts can be removed quite successfully by surgery, especially if they're treated early.

A cataract in one eye only could be the result of a physical trauma, but cataracts in both eyes is a hereditary condition and is often seen in Cocker Spaniels.

It's advisable therefore, when buying a Spaniel puppy to check that there's no history of cataracts in either parents or grandparents.

PTEG is also often referred to as 'Cherry Eye'.

Your Cocker Spaniel has a third eyelid which protects his eyeball.

This third eyelid also contains a tear gland and 'Cherry Eye' is where the tear gland bursts out of its normal position and appears in the inside corner of the eye as a red swelling. 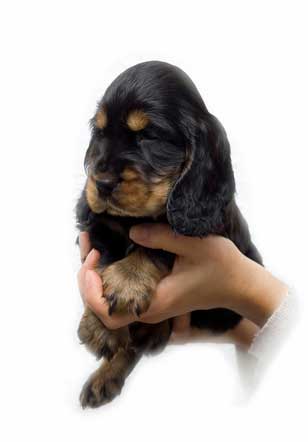 If your dog is unlucky enough to develop PTEG, your vet will probably recommend surgery to suture the gland in place.

After surgery however, your Cocker may be at risk of developing a dry eye problem.

Dry eye (also known as KCS) is a condition where your pet's eyes don't produce enough tears to lubricate the eyeball and his eyes become dry and irritated as a result.

Dry eyes can lead to infections, injured corneas and in serious cases, blindness.

KCS can usually be treated with antibiotics and corticosteroids.

Lenticular or Nuclear Sclerosis is an age-related condition in our dog's eyes.

As our Cockers grow older the lenses of their eyes can become hardened and turn a cloudy blue-grey which can look very similar to a cataract.

This condition requires no treatment and probably won't affect your pet's eyesight until the very late stages, by which time his eyesight would probably have deteriorated to that point due to old age anyway.

This is an inherited dog eye problem to which Cocker Spaniels may be prone and which can lead to eventual blindness.

Your dog may display a hesitancy to walking down steps or stairs, and his eyes may look like they're glowing or shining.

Unfortunately, there is no treatment for progressive retinal atrophy, however, according to Animal Eye Care it may no longer be a hopeless disease.

There are many cocker spaniel eye problems that can befall your pet, and although we may not be able to prevent those that are hereditary, regular checks and weekly cleaning can help keep other eye conditions at bay. 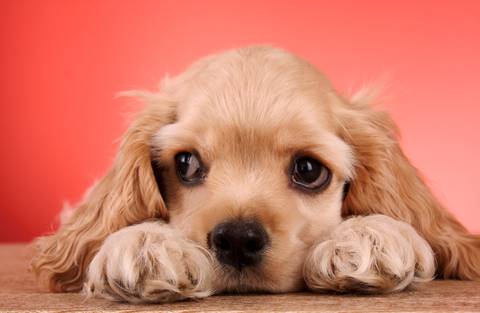 If we are to spot the signs of problems early, before they have a chance to worsen, it's best to check our Cocker Spaniel's eyes regularly.

I usually give Max's eyes a quick check when I'm 'talking' to him or giving him a cuddle, but they're thoroughly checked and cleaned when I groom him.

So many pet owners wait a few days (or more) to see if the symptoms clear or they feel they don't want to 'bother' the vet with something that appears fairly minor...unfortunately, that's often a big mistake!

Your pet must see his vet as soon as you notice any problems with his eyes; prompt diagnosis and treatment is vital where eye health care is concerned.

If we can catch problems early, before they escalate, we'll be able to minimize any discomfort for our pet and keep any damage to his eyes to an absolute minimum.

In the meanwhile, there's lots we can do to keep our pet's eyes healthy and help avoid those nasty eye problems in the first place!

Important Note: Checks that we do at home should never replace those that your vet will carry out on a normal routine visit as they will be able to pick up on your dog's health problems long before you do.