Dog glaucoma is a serious eye condition which can lead to irreversible blindness unless diagnosed and treated quickly. Find out more and learn how to spot the symptoms of glaucoma in dogs before it takes a hold of your pet's sight!

What Is Dog Glaucoma?

Glaucoma is a serious eye problem in dogs and humans alike.

It's a malfunction of the pressure within the eye and if it's not diagnosed and treated quickly, it's highly probable that your pet will lose sight in the affected eye and, unfortunately, once his sight is lost it will be irreversible.

As the disease progresses, the internal pressure may cause the eye to bulge and change shape, and the cornea may begin to cloud over. When it gets to that stage, the dog will probably already be blind in that eye.

Unfortunately, because the early symptoms of glaucoma are often mistaken for other eye diseases, such as conjunctivitis, or uveitis (inflammation of the eye), it's very often discovered too late to save the dog's sight.

What Causes Glaucoma In Dogs?

There are many different causes of dog glaucoma.

It may be primary or secondary and it will be important for your vet to understand which one he's dealing with because this will help him to determine how to treat it.

Primary glaucoma is an inherited eye disease (to which Cocker Spaniels are particularly susceptible). If your pet has this type of glaucoma in one eye, you'll almost certainly see it in his other eye within a year or two.

What Causes The Pressure?

Fluid is produced inside the eye (it's not the same as tears which are external and used for flushing the eye clean). It's a colourless liquid, called aqueous humour, and it nourishes the eye tissue.

As the aqueous fluid is produced, approximately the same amount is drained into the bloodstream and it's this balance of production and drainage that maintains the correct pressure inside the eye (intraocular pressure, or IOP for short) in order to keep it healthy and to retain its rounded oval shape.

Sometimes a blockage can stop the fluid from draining properly and that's when things begin to go wrong. As fluid production continues, abnormal pressure builds inside the eyeball, causing the eye to become hard and enlarged.

When the pressure become too high, it damages the optic nerve and leads to permanent blindness.

This is known as glaucoma.

What are the Symptoms of Glaucoma in Dogs?

Typical dog glaucoma symptoms may include;

As the build-up of pressure inside the eye increases, your dog will be in a lot of pain.

His eye may produce excessive tears; the white of his eye may look bloodshot; he may squint or blink more than normal; and he may paw at his face.

The cornea can turn cloudy or milky and his pupil(s) may be fixed and dilated (or perhaps slow to respond to changing light levels). If you're observant, you might notice your Spaniel has suddenly become sensitive to light.

As his condition worsens, the pain will increase and he can become irritable, lethargic, and lose his appetite.

If it becomes obvious that there's something wrong with your dog's vision, (like he's walking into things or misjudging distances), or his eye looks hard, enlarged and/or protruding, it's probably too late...your little fella may already be blind in that eye.

If your vet suspects your dog has glaucoma, he may use a tonometer to measure the pressure in his eye or he may refer you to a veterinary ophthalmologist for more detailed testing.

There are different types of tonometer; for example, one measures the depth of indentation left on the cornea (after applying a specific weight) to calculate the pressure from within the eye and another directs a short puff of air directly onto the cornea to produce the same result.

(You may recognise the latter procedure if you've been tested for glaucoma by your own optician).

The tests take a couple of minutes and can be done in the surgery. A general anaesthetic isn't usually necessary, but a couple of anaesthetic drops in the eyes is sometimes given.

Although glaucoma usually only affects one eye at a time, it will almost certainly develop in the other eye within 12 months. When the vet confirms his diagnosis, it will be too late to save the sight in that eye, and he or she will immediately begin working towards preventing or delaying glaucoma in the other eye.

Treatment for glaucoma often depends on the stage it has reached, (and whether or not your Cocker has sight in the affected eye), but your vet's main priority will be to save his eyesight.

If your pet still has sight, treatment may involve surgery (laser treatment or cyclocryothermy), medication, and/or eye drops to control the pain and quickly reduce the pressure within the eye. 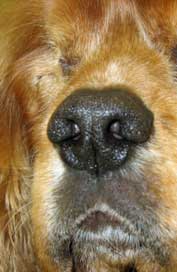 This will be achieved by controlling the production of aqueous fluid whilst increasing drainage.

Unfortunately, your dog may still eventually lose his eyesight despite prompt treatment and it may be necessary to have his eye removed - more so if the eye is already blind.

The eye may be replaced with a prosthesis or the lids may be sewn up, like the photo to the right.

As awful as this may sound to us, your dog won't really care, so long as his pain goes away, and it's surprising how well dogs can adapt to having only one eye. His good eye will compensate for the loss.

If your dog is diagnosed with secondary glaucoma, the vet will need to treat the illness causing the glaucoma, ie. he will treat the disease not the symptom.

Reducing The Risk of Dog Glaucoma

Can glaucoma be prevented?

Well, no, not really, but there are some things you can do to reduce the risk of glaucoma for your Spaniel:

Whilst it's not possible to prevent dog glaucoma, taking the above precautions may help to reduce the overall risk of it developing.

They say human eyes are a window to the soul, but they also tell us a lot about the state of our health.

It's the same with our dogs and that's why your vet will check your Cocker's eyes at every visit.

In between visits, if you suspect your pet has a problem with his eye(s), don't try to diagnose and/or treat it yourself, and don't put off going to the vets in the hope that it will clear up without treatment.

If you'd like to learn more about dog glaucoma, this expert site on animal eye care goes into more depth.

When it comes to ailments with our dog's eyes, the best thing we can do for them is to get them to their vet for a check up as soon as possible.

If it's glaucoma, the sooner it's diagnosed the better, and always by your vet or a veterinary ophthalmologist.

Leave it to the experts...it may save your Spaniel's sight!