Discover what causes entropion in dogs, what symptoms to look for, how to diagnose it and what treatment options are available to help keep your Spaniel's eyes and eyesight healthy!

Entropion In Dogs: What Is It?

Entropion is one of the most painful eye problems in dogs. 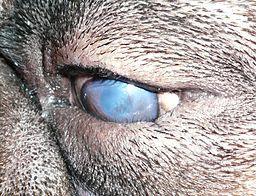 This is where the edge of the dog's eyelid rolls inwards and the hair on the eyelid rubs against the eyeball causing irritation and considerable discomfort, and can eventually lead to severe damage to the cornea.

If entropion isn't treated, it can lead to serious scarring and eventual loss of sight.

It's unusual for dogs to have entropion in only one eye; it normally affects both eyes, and although both lower and upper eyelids can be affected, it's more commonly seen in the lower lids.

What Causes Entropion in Dogs?

For many breeds, including Cocker Spaniels, entropion is a genetic condition (primary entropion) and is often seen in newborn puppies.

Where it's hereditary (but not present at birth) it may develop later within the pup's first year. However it's more commonly seen in older Cockers.

Entropion can also be triggered by other eye problems and diseases:

Where it's caused by another problem, it's known as secondary entropion.

Symptoms of Entropion in Dogs

The most obvious symptom of entropion is the inward rolling of the upper and/or lower eyelids, but there are several other signs to look out for, including:

If your Spaniel is unlucky enough to have entropion, his eye(s) will be very painful and he may paw at them or try to rub his face along the ground in a bid to relieve the pain.

Obviously, this could cause further damage and if you manage to catch your dog doing either of the above, they should be discouraged; or better still, fit him with an Elizabethan collar.

Be aware, if the pain continues, your cocker spaniel may become uncharacteristically aggressive, so please take care.

If you suspect your Cocker has entropion (and it will be fairly obvious there's a problem) don't waste time; make an appointment with your local surgery.

Your vet will examine your Cocker's eyes thoroughly as a matter of course, but as the classic tell-tale sign of entropion is the curling-in of the edge of your dog's eyelid, it will make diagnosis easier.

The vet may place a few drops of anaesthetic in your pet's eyes to alleviate the pain and allow him to carry out a thorough examination.

He'll check for signs of corneal damage to determine the best treatment options. This is usually done by dropping a dye onto the eyeball.

If there are any abnormalities on the surface of the eye, the dye will help to highlight any problems by 'clustering' around abrasions or other damage.

Depending on the severity of the problem, and the experience of your vet, he may refer your Spaniel to an ophthalmologist.

The symptoms can be easily managed by prescribing ointments or eye drops to help lubricate and soothe the eye by reducing inflammation and irritation, but it won't resolve the underlying problem.

Put simply, a small 'V' shape is cut out of the lid and the two edges are sewn together to pull and roll the deformed eyelid back into line and away from the eyeball.

If you have a puppy with entropion, it's unlikely that the above surgery will be performed because your pup will still be growing.

Instead, the lids may be rolled back and held in place with a couple of temporary stitches to keep them away from the eye. This procedure will probably need to be done a couple of times as your dog grows.

However, it may not be enough to resolve the problem and your Spaniel may still need surgery when he's older.

Your poor Spaniel will need to wear the 'dreaded lampshade' for a while to prevent any accidental damage caused by rubbing his eyes with his paws, and he may need ointment or eye drops for a while, post surgery.

He'll also need follow-up visits so that the vet can remove the stitches and check that he's healing well.

Is It Possible To Prevent Entropion?

The short answer is no; entropion cannot be prevented. However, precautions can be taken.

For example, responsible breeders won't breed from dogs that have a history of entropion (or any other dog eye problems) and will often check the parents  (and in some cases, the grandparents) of the sire and dam.

Those that are truly passionate about the breed will also carry out CERF testing (Canine Eye Registration Foundation).

This is an annual test which involves an examination by a certified vet to document the condition of a dog's eyes and helps breeders to decide whether or not to breed a particular dog.

If, for some reason, entropion isn't diagnosed or is left untreated, the rubbing of the fur against the eye can result in serious damage to the cornea and if ignored long enough, it can lead to eventual blindness.

The good news is that it's not something that can be easily overlooked; the curling-in of the eyelid is fairly noticeable, and where surgery is carried out early (before any real damage has been done) the prognosis of this condition is very positive.

Good news all round!

Photo credit for Entropion in Dogs: