Although we love our pets dearly, constant attention seeking behaviour can soon become annoying and embarrassing! Understand the signs and causes and learn how to stop your Cocker Spaniel demanding your attention!

When a puppy seeks your attention, it's often cute and endearing, but when your puppy grows up and wants you all to himself, it can become a very different matter altogether.

We often give in to our dog's attention seeking behaviour, either because we love them and can't bear to ignore them or because we sometimes just want a bit of peace and quiet, so we just give them what they want!

Unfortunately, giving them what they want only teaches them that their unsociable antics work, so they do it more and more because they know it works!

What behaviour you accept from your Cocker Spaniel (or don't) is entirely down to you; it all boils down to personal choice.

And just in case you're not sure what I'm talking about, check out the following:

What Is Attention Seeking Behaviour?

Attention seeking comes in many forms, some endearing and others not so charming.

We must decide which behaviours are acceptable and which are not. Those behaviours listed below are my idea of good or non-acceptable, but you should choose your own.

There are some attention seeking behaviours that I'm happy to accept, such as;

Now, who could resist that?

Unfortunately, there are other attention seeking behaviours that I'm not so happy to go along with.

Take a look below; I think you'll agree that these behaviours are simply not acceptable. 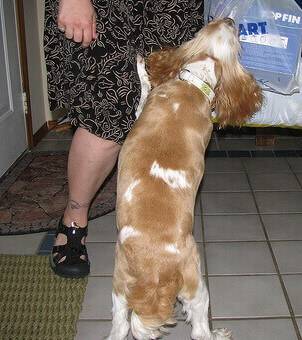 This is attention seeking behaviour! 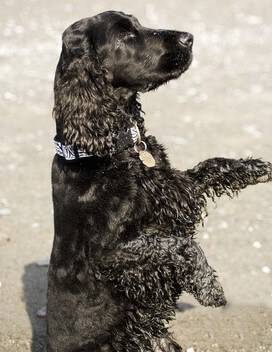 Do any of these sound familiar? I'm betting that at least some of them do!

In all of the above examples, your Cocker Spaniel uses attention seeking behaviour to get what he wants from you.

Never try to resolve issues of aggression in your Cocker Spaniel.

If your pet's attention seeking behaviour turns to biting or aggression, I strongly recommend you seek professional advice and assistance from your vet or an animal behaviourist.

What Causes Attention Seeking in Dogs?

If your Cocker Spaniel's attention seeking behaviour is getting worse and becoming a problem for you, there may be a couple of reasons for this:

You can relieve the boredom or stop it from happening in the first place by making sure you Cocker has lots of stimulating toys and chew bones to keep him occupied.

Give Your Cocker Spaniel Lots of Exercise!

Physical exercise and mental stimulation will have a calming, relaxing effect on any dog, so the best thing you can do to help stop your Spaniel from becoming bored is to burn off his excess energy and tire him out.

Make sure he has a regular routine of exercise, play, and training (this is a good idea regardless of whether he's displaying attention seeking behaviour or not) along the lines of the following: 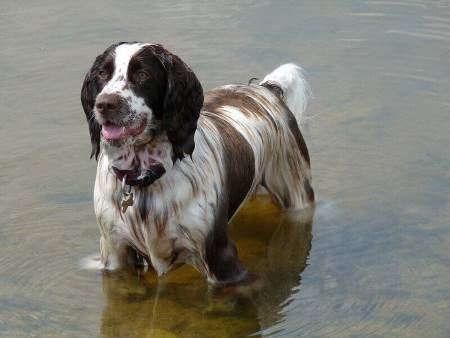 Come on in, the water's lovely!

Making sure your Cocker gets plenty of exercise and play may be enough to curb attention seeking behaviours, and you could see an improvement within a week or so!

Don't Always Give In To His 'Demands'

Don't always give your dog what he wants just because he's 'asked' for it,

However, your dog may be hungry, cold, hot, thirsty, and you can't deprive him of these.

The best way to deal with these situations is to make sure his water bowl is always full, that he's fed at his regular meal time(s) and that he's otherwise comfortable.

If he's still demanding your attention, simply grit your teeth and ignore him.

How To Stop Your Dog's Attention Seeking!

If your Cocker's manners don't improve as much as you'd like.......read on for more help and advice!

Don't Give Him What He Wants!

As we've seen, our pets will try to attract our attention in many different (and sometimes imaginative) ways, and our response will usually vary between:

All of which is the wrong thing to do, but I'm willing to bet that we're all guilty of doing the same!

What we often don't realize is that by using our pet's name, or speaking to him (for example, asking him to get down or to be quiet) or by simply touching him (moving him out of the way), in his eyes we are rewarding him for his behaviour; we're giving him the attention he's seeking!

Our dogs soon learn that they can get what they want by behaving in a certain way, and that's when this (unwanted) attention seeking behaviour becomes habitual...because your dog has learned that it always works!

Unfortunately, if his behaviour isn't appropriately managed before you know it, your dog may develop behavioural problems that you can no longer handle and may begin to drive you crazy!

Unfortunately, many Cocker Spaniels are currently sitting in rescue centres because of this lack of understanding.

"The recommended response is to ignore him altogether:
don't speak to him, don't look at him and don't touch him
- in your dog's eyes, these actions are all forms of reward"

The Key Is Not To React

When our dogs display attention seeking behaviours, we know that always giving them what they want, when they want, is inadvisable, however as I said earlier, it is subjective, and if you think it's okay to give him a cuddle when he 'demands' it...that's fine.

The aim is to give your Cocker Spaniel lots of attention on your terms; in fact, the same attention as he gets now, but give it to him only when his behaviour is good!

But there are other attention seeking behaviours that we don't want and shouldn't tolerate, such as jumping up, constant barking or whining.

If we react to our dog's behaviour, we're not only confirming that their antics work, but we may also be (inadvertently) helping to increase their dominance by following and not leading our dog!

My advice is to always ignore your dog's attention seeking behaviour and reward him only when he's well behaved or quiet.

Ironically, we tend to ignore our dogs when they're quiet and (unwittingly) reward them (with touch and the sound of our voice) when they're not - the exact opposite of what we should be doing!

So, the next time you see your Cocker Spaniel behaving well or resting quietly, why not gently stroke him and tell him he's a good boy?

Rewarding your dog when he's quiet will help teach him that nice things happen to him, like belly rubs or cuddles when he's good or playing quietly!

The worst punishment you can give an attention seeking dog is to deprive him of your attention and affection, so the next time he's making demands, the best thing you can do is ignore him.

Yes, I know that it can be easier said than done, but trust me. Have patience, and you'll see that it really does work.

Don't react to your dog's demands. Whatever unacceptable behaviour your dog displays, remain calm, don't speak to him, don't touch him, and don't make eye contact with your dog (he will view all these as forms of reward).

Is Your Dog Is Barking For Attention? 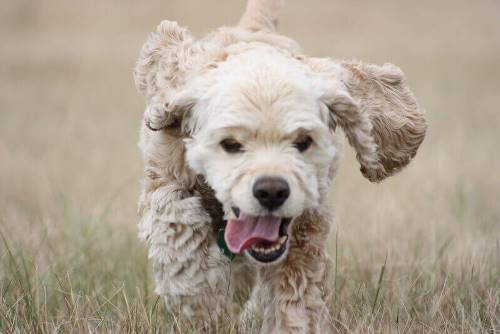 Above all, be consistent!

What If That Doesn't Work?

If moving him to another room fails, and he continues barking, you may want to consider using a stronger barking deterrent, such as a water pistol or an air spray (this is compressed air used to clean computer keyboards and cameras).

Be careful to avoid his eyes.

Either of these may be used each time he uses barking to get your attention. The action will startle him into silence, interrupting his behaviour and you should be able to manage him.

If you'd like more information on how to stop your dog barking, you'll find lots of help and advice here.

As the saying goes, 'There's no such thing as a free lunch', so make your dog work for anything that you give him and...

The bottom line is, if your dog wants attention, give it to him, but do so on your terms - not his!

When your Cocker Spaniel responds in the way you want him to, you can give him what he was asking for (food, affection, etc.) because you will be rewarding him for following your commands; you're rewarding his good behaviour, NOT his attention seeking behaviour!