Food aggression in dogs is a situation which can be triggered if your Cocker feels his food is under threat. It can be very dangerous and frightening to see.

Learn how to spot the signs of dog food aggression and how to remedy this potentially dangerous aggressive dog behaviour!

Dog Food Aggression: What's It All About?

What's it all about?

Your dog believes his food is going to be taken away from him (yes, even though you gave it to him) and he will do all he can to stop that from happening.

Food aggression in dogs (also known as 'resource guarding') is instinctive and it's normal canine behaviour. 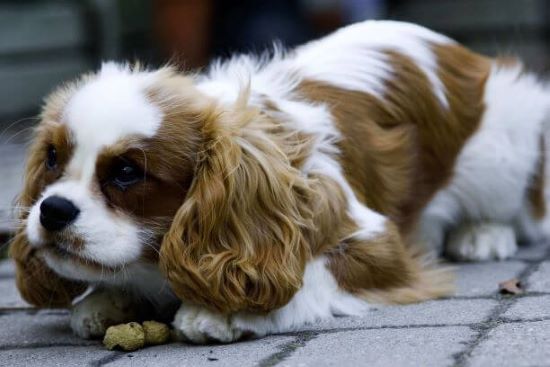 It's a throw-back to the wild where dogs lived and hunted in packs and could never be certain when or where their next meal was coming from.

They had to fight for their share of the 'spoils' and fiercely guarded their food as only the fittest and strongest dogs survived.

Today, our domesticated pets no longer have to forage for their food. We spoil them and they always know that they're not far from their next meal or a tasty treat!

However, this instinct can rear its ugly head from time to time (and you may think for no 'apparent' reason).

Dog food aggression is a potentially dangerous and (in our human world) unacceptable canine behaviour, and if it's not addressed swiftly your dog will almost certainly end up biting or attacking someone, resulting in a serious injury.

If you see signs that your Cocker Spaniel is beginning to guard his food or toys, I recommend you take swift action, and if you're not sure what those signs are, you'll find what you're looking for further down this page.

What Causes Food Aggression In Dogs?

There are many situations that may cause food aggression in dogs, but in most cases it's either:

Your dog's aggression may be triggered if he thinks you're going to take his food from him (even though you gave it to him in the first place!).

When he growls or snarls, he's giving you a very definite warning to stay away!

If you then remove his food from him you'll be making the problem worse because you'll have confirmed that he was right all along: you were going to steal his food!

Food aggression in dogs may also be triggered where there's a question over leadership, for example, the owner relaxes his role as leader, the dog becomes aware of it and views the lapse as a weakness.

In a pack, (wild or domestic) members will usually compete with one another and the strongest will win the position of head of the pack.

All packs need a leader and if your Cocker sees a weakness in you he'll almost certainly try to assume the role of alpha male (which, by the way, could also be female, the term just means 'top dog or leader').

Your dog should never be allowed to 'run the show' and it's important that you quickly reclaim your status as pack leader if you are going to resolve your Cocker Spaniel's food aggression.

Learn more about the alpha dog and how to become the leader of your 'pack'.

The first signs of food aggression in dogs are subtle and very easily overlooked.

Some or all of the following signs may be seen if you approach your dog while he's eating, for example, he may: 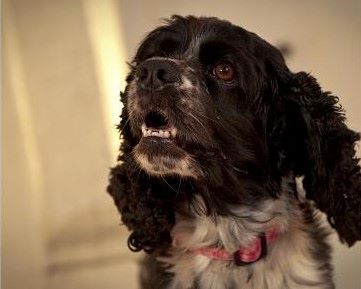 Stay away from my food!

If you notice any of these 'early warning signs', I recommend you nip it in the bud before it escalates.

The following are more obvious signs of food aggression in dogs and if left unaddressed, will become more difficult to resolve.

As the resource guarding escalates, your dog may display other, more threatening signs. For example, he may:

In a domestic environment, aggressive dog behaviours such as those listed above are unacceptable; they are very dangerous and must be addressed immediately.

IMPORTANT NOTE: Do not, under any circumstances, try to remove food from a dog displaying food aggression. If you do, you'll almost certainly get hurt.

How To Remedy Food Aggression In Dogs

To help you retain (or regain) the role of alpha dog, make sure you always feed your dog after you and your family have eaten.

At the very least, let your dog see you eat something, a cracker perhaps, or simply pretend to eat some of his food before you feed him.

Follow these recommended feeding guidelines, which will help to prevent food aggression in dogs, and then try one or more of the following remedies:

This exercise will help to teach your Cocker Spaniel that you are the source of his food and will help him to enjoy (and, more importantly, accept) you approaching him and being around him while he's feeding.

The following method only applies if your puppy or dog is beginning to display early signs of dog food aggression and you are certain that your dog won't bite you. Removing food from an aggressive dog can result in serious injury.

If there's any doubt in your mind, do not try to take his food from him.

Your puppy will eventually learn that you are the provider of his food (but only when he behaves) and that if he misbehaves you will remove it and ultimately, he won't be fed.

Resource guarding may be another name for food aggression in dogs but it isn't limited to food; your puppy may also guard his toys! 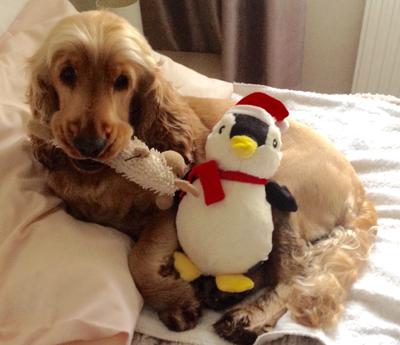 These are my favourite cuddly toys!

To prevent this from happening, you may like to try the following exercise:

(If he runs away with the toy, don't chase him - you'll only be setting yourself up for trouble!)

Food Aggression In Dogs: A Word of Warning

Resolving food aggression in dogs is not easy nor is it a quick fix; it needs careful handling.

Please do not attempt to remedy serious food aggression in dogs on your own. Always seek professional advice from your vet or a qualified dog behaviourist!

Food aggression should never be punished with harsh words.

And no matter how frustrated you are, please don't become aggressive yourself (verbally or, heaven forbid, physically) because this won't help.

Aggression from you will only make him much worse and the situation may spiral out of control as he responds to (and attempts to compete with) your aggression/retaliation.

Whilst it's possible to address food aggression in puppies and mild cases in dogs, I recommend you discuss your problem with either your vet or a dog behavioural specialist before attempting to treat any serious aggressive behaviours in dogs, particularly where you're worried that your pet may bite you.

If your Cocker Spaniel is prone to resource guarding, you'll probably need to watch for the reappearance of any warning signs of dog food aggression and continue practising some of the above exercises from time to time, probably for the rest of his life. In my opinion, it never really goes away.

Make a point of always being around your Cocker when he's eating and drop a couple of morsels of his favourite food into his bowl. Hopefully, this will help to reinforce in his mind that people approaching his dish mean that something good is about to happen and he shouldn't feel threatened.