Golden Cocker Spaniels Are My Favourite!

Don't you love golden Cocker Spaniels? There's something special about golden Cockers. I'm not sure what it is, but they are definitely the 'blondes' of the doggie world and are loved by many.

When it comes to goldens, I may be biased, but I adore other Cocker colours too. Read on and discover lots of lovely pictures of cute golden cockers. I hope you enjoy!

Just look at these golden Cocker puppies; aren't they adorable?

Who could resist? I would be hard-pushed to choose just one of them (I think there are six!), but if I really had to, I'd plump for the little puppy second in from the right.

It's a difficult choice, though! 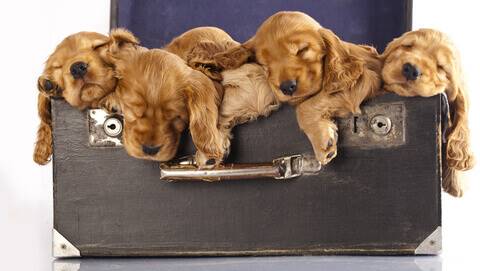 This is Max, my very loyal friend. We often walked along the old railway line at the bottom of our village. It was quite a walk, about 6 miles, but we used to manage it comfortably.

I would have a few aches and pains the next day, but Max would be up for going around again! 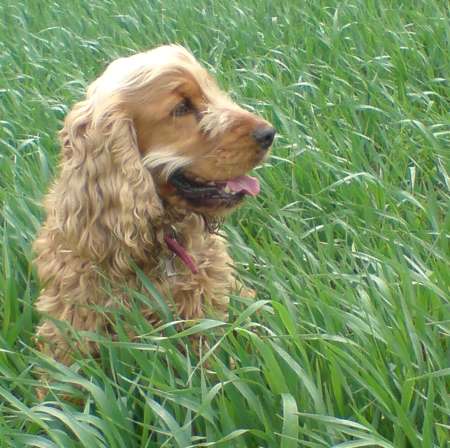 Let's rest a little while Mum!

On either side of the path was a mixture of trees, hedges and fields, some planted with corn, some simply grassed, and others just left fallow.

There were many rabbits to chase (for Max, not me!) and plenty of birds to tease.

Thankfully, there wasn't any livestock or traffic, so I could let him off his lead so he could have a bit of freedom!

Max loved running through the grass, but I had a job keeping him out of the cornfields!

I really can't put my finger on why golden cockers are loved so much, but it's a fact they are favourites with many owners. 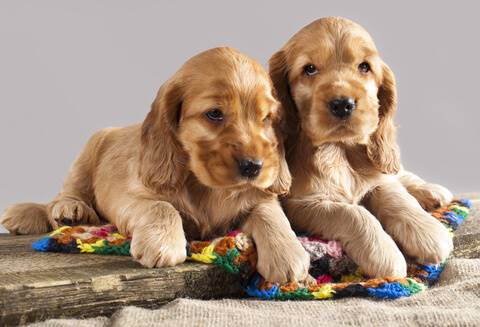 These two Cocker Spaniel puppies have beautiful colouring and look so cute. I'm sure it won't be long before these two are getting up to mischief!

The saying 'Blondes have more fun' might apply here!

Please Mum, Can I have A Biscuit?

Max was about three when this photo was taken, which seems so long ago. 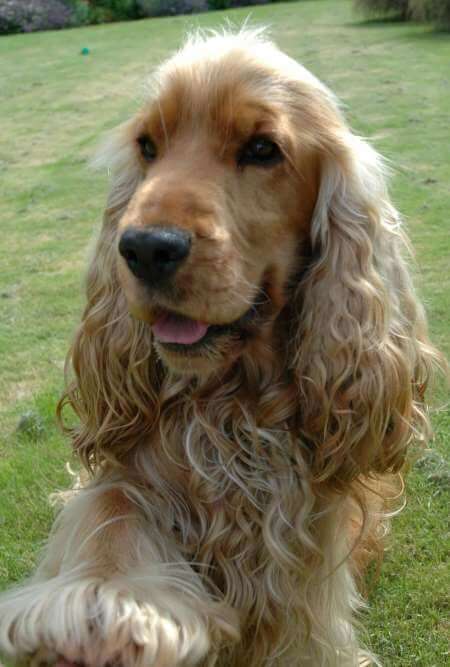 Please Mum, can I have my treat now?

As you can see, we're in the garden, and I was trying to get some weeding done. Of course, Max was helping me, but invariably getting in the way.

I had thrown a few small treats into the centre of the garden to keep him occupied (and out of my hair!), but he was soon back asking for more.

The photo shows him giving me his paw, asking for a treat. It always works for him!

A Beautiful Portrait of a Golden Cocker Spaniel

I'm repeating myself now, but there's something so very special about Golden Cocker Spaniels! Well, I'm bound to say that as I own one myself, so I guess I'm a little biased. 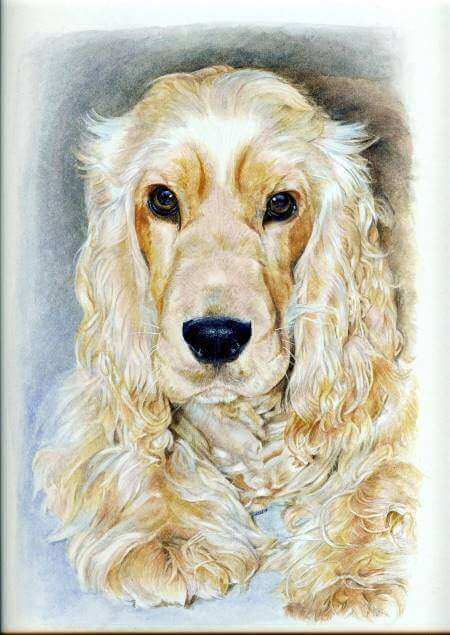 This pastel sketch is simply lovely!

I love other Cocker colours too, which is why I have photos of all colours on my website, not just the goldens!

However, this page is all about golden Cocker Spaniels, so let's get on with it!

This beautiful watercolour of Max was commissioned for my birthday by my late husband, Don, which was very sweet of him.

Max was about 12 months old then, and it's an absolutely gorgeous likeness.

I adore this portrait and have it framed and hung on the wall in my study. I can't help smiling each time I look at it.

This photo of Max was taken after we'd been on a walk along the old railway line near my home.

It was Max's first experience of snow, and he seemed to delight in how it floated around him like powder when he romped around in it. 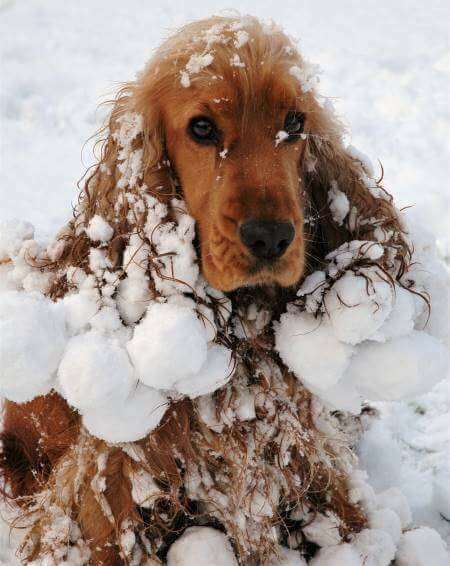 Poor little mite, he could hardly walk by the time we'd turned around to head for home.

He struggled under the weight of the snowballs in his coat and around his feathers, and at one point, I thought I would have to carry him. However, he plodded gamely on!

Before taking him inside, I had the difficult task of removing the snow from his coat. However, I eventually managed to get all the snowballs out of his fur.

He Also Likes To Play Football!

This is him again, much younger (about three or four months old), playing football. 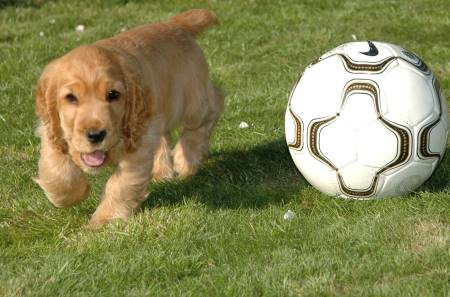 Come on Mum, kick the ball!

He would try and pick up the ball in his mouth, but it was too big for him.

Instead, he'd end up rolling over it, but he'd keep trying anyway.

It wasn't too long before Einstein realised he could actually move the football with his nose, so trying to get it into his mouth was no longer an issue!

Max, my golden cocker spaniel, is still a puppy in this picture, although a few months older. 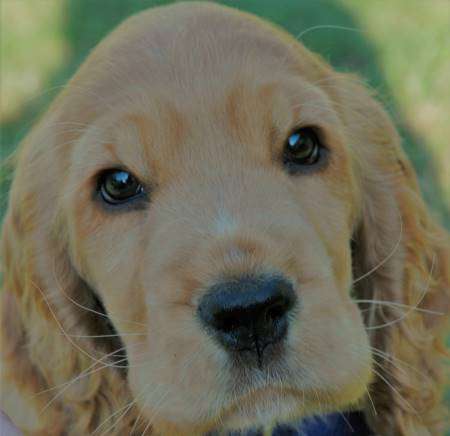 We'd been playing ball in the garden (as usual!), and he was exhausted.

He'd gone looking for shade as it was a sweltering day, which is exceptionally unusual for our neck of the woods; however, I wasn't complaining!

Max decided he'd had enough and went and sat in the shade under the apple tree until he cooled off and was ready for another game of football. That's why the photo is darker than it should be - he's shaded.

Puppies Grow Up So Quickly!

This photo was taken at the breeders house when he was less than one week old. 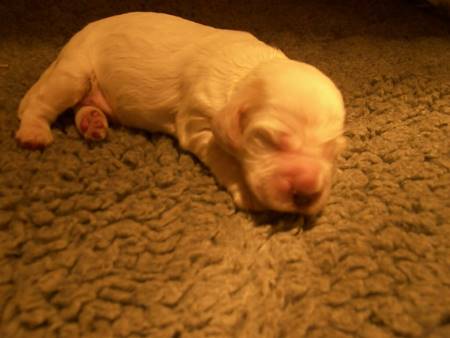 Wasn't he just so cute?

I remember being so scared of picking him up in case I dropped him!

Puppy days are very special. Like our youth, they'll never come around again, so make sure you and your puppy enjoy those special times while you still can.

Appreciate every single day you have together.

Max is three and a half years old in this photo, and looking rather in need of a hair cut! 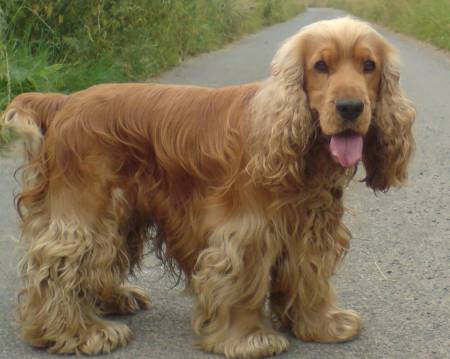 He loved going for walks on this old railway line just behind our house when we lived in North Yorkshire.

We walked every day for about an hour and a half.

The lane meandered for miles through the Yorkshire countryside, so it was safe to let him off his lead.

He would run on ahead, but he'd stop and look back every now and then to check I was still around.

He'd run and run but never seemed to tire. He's such a little sweetie!

I'm sure you know Cocker's coats come in many different colours and markings. It is an excellent place to give them a quick mention here.

Cocker Spaniels come in various colours, some solid, like chocolate (in fact, chocolate cocker spaniels are our second favourite!), black and, did I mention, golden?

You can also find a combination of mixed colours and markings, for example, black and white, parti-colours and roans.

What follows is a brief explanation of Cocker Spaniel coat colours and some of the terms used to describe them.

﻿According to Wikipedia, coat colours of the Cocker Spaniel are as follows: 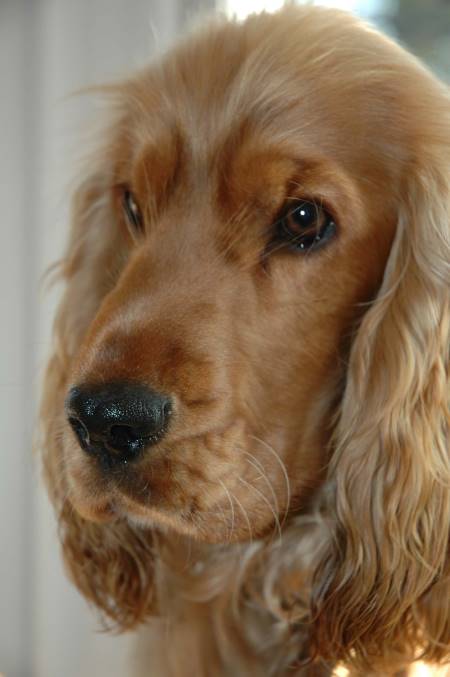 I'm certainly not an expert on coat colours.

Generally speaking, though, the solid colours (also known as 'self') are chocolate, black, golden, and, very rarely seen, sable.

Although I've never owned a black Cocker, it's said that the black, glossy coats are much heavier, and because of this, they may need more grooming than any of the other colours.

Golden Cocker Spaniels can range from a light golden colour to a very dark rusty shade. Where the golden coats are darker, they're sometimes referred to as red Cocker Spaniels.

Chocolate Cocker Spaniels are a beautiful reddish-chocolate brown, and they're often referred to as 'liver' coloured.

If you're planning to show your pet, breed standards recommend that the coat shouldn't contain any white. However, a little patch of white on the chest is allowed.

Roan is a mixture of white and coloured hairs.

The coloured hairs are usually found in solid patches or clumps. In contrast, the white areas are typically flecked or 'ticked' with a solid colour.

The roan colours are:

For example, you often see them in:

Ticking is a term used when tiny flecks of a colour show in the white of the dog's coat. 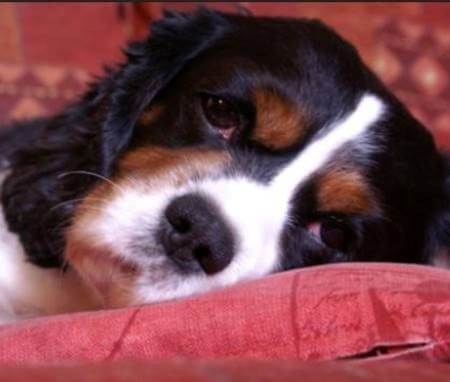 The term "open marked" is used where there are no ticking or roan markings in the dog's coat; instead, the coat will have clear white between the coloured patches.

You'll also find dogs with tan markings on their face (above eyebrows and on the muzzle) and under their tails, feet, and chests.

Where the dog's coat is predominantly black, his colouring would be termed black and tan.

Some breeders say that the golden Cocker Spaniel (and some say all solid colours) is prone to 'Rage Syndrome'. However, today breeders are conscientious and check the history of the sire and dam for any sign of the condition before breeding.

Thankfully, rage syndrome in Cocker Spaniels is rare, and instances of aggression often tend to be behavioural problems rather than rage.

Where a (responsible) breeder has evidence to suggest that any dog has shown signs of rage syndrome, they're unlikely to be used for breeding purposes.

Why Not Submit Your Spaniel's Photo Here?

Thank you for letting me indulge my love for Max on this page!