There are lots of English Cocker Spaniel colours, showing many different markings and patterns. Cocker coats are luxurious and silky, no matter what colour their coat is, and they may take a bit of looking after, but they're worth it!

Learn about their beautiful coats and the wide range of Cocker Spaniel colours and markings below.

Cocker Spaniels have medium to long coats. Their fur may be straight or wavy and feel very silky to the touch.

As they move on from their puppy stage, they begin to develop feathers on their legs, chest, and underbelly.

As I mentioned earlier, the Cocker Spaniel's coat comes in various colours with many different markings. 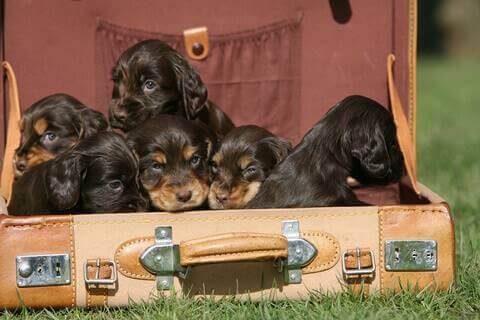 Black and tan: Cocker Spaniel colours at their best!

Roan markings are probably one of my favourites, especially the blue roan.

You may see some patterns and markings, and sometimes there may be a small patch of white on the chest and throat, or tan markings, for example, on the eyebrows, throat or feet.

What follows is a brief explanation of Cocker Spaniel's coat colours and some of the terms used to describe them.

According to Wikipedia, the official English Cocker Spaniel colours are as follows:

I'm certainly not an expert on Cocker Spaniel colours, but I'll give it my best!

According to the Kennel Club, the solid colours (also known as 'self') are:

Although I've never owned a black Cocker, I've heard from various black-coated owners that the black, glossy coats are much heavier and that they often need more grooming than any other colours.

Golden Cocker Spaniels can range from a light golden colour to a very dark rusty shade.

Chocolate Cocker Spaniels are a beautiful reddish-chocolate brown, and they're often referred to as 'liver' coloured.

If you're planning to show your pet, breed standards recommend that the coat shouldn't contain any white; however, a little patch of white on the chest is allowed.

The roan coat is a 'blended' mixture of white and coloured fur; I think they are the best, especially the blue roan; this colour Cocker is just beautiful (sorry, Max!). 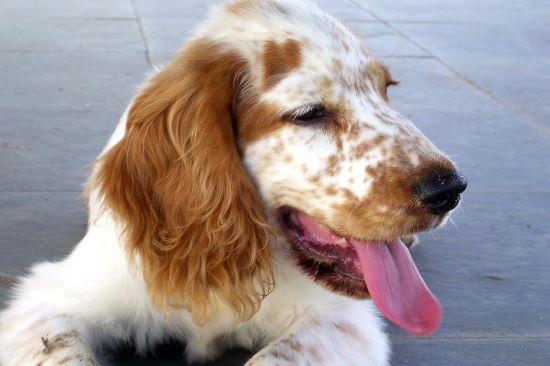 Cocker Spaniel colours: This orange roan has a beautiful coat!

The coloured hairs are usually found in solid patches or clumps. In contrast, the white areas are often flecked or 'ticked' with the solid colour.

The roan colours are:

Parti-colours usually consist of two colours, one of which is always white, which must cover at least 10% of the dog's coat.

The other primary colour can be any of the solid colours. For example:

Where parti-coloured coats contain a small amount of tan, they're known as tri-colour Cocker Spaniels.

Ticking is the term used when tiny specks of a colour show in the white of the dog's coat.

The term "open-marked" is used where there are no ticking or roan markings in the dog's coat; instead, the fur will have clear white between the coloured patches.

You'll also find dogs with tan points (or markings) on their face, above the eyebrows and on the muzzle. You may also see these tan markings under their tails, feet, and chest.

Where the dog's coat is predominantly black, and the fur has such tan markings, his colouring would be termed black and tan.

I love to see tan marking above each eye. I think it gives the Cocker Spaniel a curious expression!

ASCOB is short for Any Solid Colour Other Than Black.

The ASCOB range runs from pale cream/silver/buff to deeper shades of brown, red, golden and sable.

A small amount of white is sometimes found on the chest, and lighter shades of the colour may be seen 'peppered' through the topcoat and feathers.

I hope you now have a better idea of the beautiful coat colours of the Cocker Spaniel to help you decide which colour you like the best.

Personally, I don't care. I love all the coat colours of the Cocker Spaniel. However, if the opportunity arose, I would plump for a blue roan or another golden Cocker Spaniel, but it's a tough choice!

You can learn more about Cocker Spaniel coat colours here.