How To Stop Your Puppy Chewing

Is your cute Cocker puppy chewing everything in sight? He is? Well don't worry.
Our step by step guide will soon stop your cocker spaniel puppy munching his way around your home!

If your new puppy is chewing his way through your home, don't worry, you're not alone!

Chewing is perfectly normal behaviour for puppies, especially when they're teething; it's how they learn about the world around them.

I'm not saying that you should stop your puppy chewing, just redirect it.

Teach him what he can and cannot munch on, otherwise he'll think that everything he can get into his little mouth is 'fair game'!

Many new pet owners fail to manage puppy chewing, perhaps because they believe Benji looks cute chomping on something twice his size, or simply because they don't know how.

Unfortunately, there are some owners who eventually become so frustrated that they either return their puppy to the breeder, place it with a rescue centre, or worse!

Puppies don't instinctively know what they are (or are not) allowed to chew on, so it's up to us to teach them what's acceptable and what's not.

Before we move on to our top 10 tips, let's just look at some of the reasons for puppy chewing.

Your puppy may be:

1: Biting Humans Is Not Allowed

When managing puppy chewing behaviour, it's essential that you first teach your puppy that he must never place his teeth on human skin or clothes but that he can (and must) chew on his own toys.

It's essential that stop your puppy biting and nipping people as soon as it begins, otherwise you and your dog may be in for a bumpy ride.

When you've a lively pup in the home it soon becomes necessary to tidy up on a regular basis because your puppy will try to chew almost everything he comes into contact with; electrical cords, (eek!) shoes, socks, books, furniture. In fact, almost anything that's left lying around, or which he can easily get to.

Make sure that the children's toys are put away and all rubbish bins and waste-paper baskets are out of your puppy's reach.

TV remotes are a firm favourite with chewing puppies, with spectacles coming a close second.

We're very privileged to be acquainted with a Collie Labrador cross called Ben who, as a puppy, managed to chew his way through several pairs of spectacles, a couple of TV remotes and even a set of dentures!

Don't leave anything lying around. Make sure you home is puppy-proof and feel safe in the knowledge that your pup won't come to any harm.

3: Supervise Your Puppy At All Times

The only effective way that you can do this is to be around to supervise him at all times (otherwise he's just going to chew anything in sight).

4: Crate Puppy If You Can't Supervise Him

You may not always be around to keep a close eye on your puppy, however, you could put him in his crate and check in on him from time to time. This way he can't get up to much mischief.

If you don't yet have a crate, an alternative would be to place him in a dog pen or in another (puppy-proofed) room where you can leave the door open and use a baby gate.

That way he will still be able to see you and will most likely nibble quietly on his own chew toy and not your best pair of shoes!

A crated puppy can't get into mischief and it will help him to focus on the toys you want him to chew.

5: Plenty Of Exercise And Training

One of the ways you can help stop your puppy chewing is by making sure he gets lots of exercise and training to use up all that excess, pent-up energy.

It will help to keep him out of mischief too! 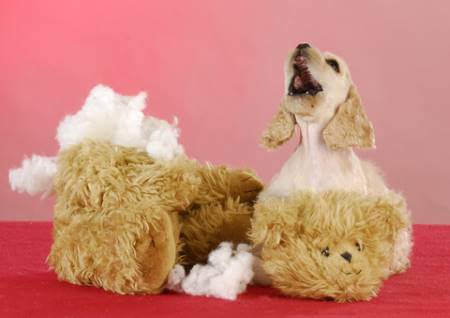 A young puppy of about 12 weeks of age, should be taken for two or three 15 minute walks each day, and given a couple of 5 to 10-minute obedience training exercises each day.

As he gets older, the length of time he's exercised may be gradually increased; an hour's walk, once each day is ideal for an adult dog and if you can exercise your dog twice each day, even better!

Your puppy's training sessions may also be increased a little each day, but not by too much - you want to keep them light, interesting and fun!

The mental and physical stimulation your puppy gets from exercise and training (as well as play) will help to burn up any excess energy. He'll be contented and relaxed and probably too tired to chew on your slippers or your favourite handbag!

This may sound like common sense, but don't allow your puppy to chew on your shoes or your slippers in the first place.

Whilst initially, it may seem cute to see those little puppy teeth trying to chew on something twice his size, it won't be too long before those teeth really begin to do some damage.

You'll also confuse him because if he chews your new trainers to shreds, and you subsequently discipline him, he won't understand why.

He won't be able to tell the difference between an old pair of slippers and your new trainers. To him, they'll both smell delicious and will be comforting and he won't understand why he can chew on one and not the other!

7: Plenty Of Toys To Chew

Make sure your Cocker has lots of safe puppy toys to chew on, such as Kongs, nylon bones, sterilized bones, rubber bones, and rope toys, the latter being particularly good for little puppy teeth.

Kongs can be stuffed with tit-bits and treats and are a great way to encourage your puppy to chew and will keep him busy for a while, especially if you freeze the Kong first. These will also be a great comfort to him if he's teething.

If your puppy is reluctant to chew his toys or chew bones, try smearing the ends with a bit of yeast extract, potted meat, peanut butter, or fish paste to help encourage him to get going.

Let him have a couple of toys to chew and play with each day, rotating them regularly so that he doesn't get bored with them.

Your puppy should have plenty of interactive playtime every day, not only because it's important for his development, but because it's extra exercise and he'll enjoy it too!

Try throwing a Frisbee and let him chase after it or play a game of fetch with his favourite ball. You may need to teach him to fetch because puppies don't always automatically know how to play! Can you believe that?

Exciting playtime with lots of mental stimulation can help stop dogs chewing, so go for it!

If you catch your puppy chewing something that you don't want him to chew, say 'No' in a firm voice. It should be loud enough to startle him but not so loud that it frightens him.

Remove the object and replace it with one of his toys and when he starts to chew it, praise him.

It's best to 'discipline' your puppy the moment he misbehaves otherwise he won't understand why he's being reprimanded. If you leave it any longer than a couple of moments it will be too late. Catch your puppy in the act and discipline him immediately.

If your puppy is chewing the furniture say 'No', in your 'naughty puppy voice' and remove him away from the furniture or out of the room (it's obviously impractical to move furniture each time) and give him one of his own chew toys.

If you're persistent and consistent in your discipline, your puppy will eventually learn that he's not allowed to chew the furniture or other household objects, but that he is allowed to chew on his toys.

If your puppy is still chewing everything in sight you might like to try the following to help speed things up a little:

What you're doing here is creating a situation where you can 'catch him in the act' which allows you to respond immediately. You're teaching him that he's only allowed to chew his own toys.

Practice this exercise regularly and to help strengthen and reinforce your puppy's training.

You may also be able to use the 'Leave It' command to help stop your puppy chewing, although it's probably only going to be effective if you use it before he actually picks up something you don't want him to chew.

If he doesn't yet understand this command you can learn how to teach your puppy to 'Leave It' here.

A Water Pistol Can Help To Stop Puppy Chewing

Some owners have found a water pistol or a water spray with the nozzle turned to jet mode a fairly effective way of stopping puppy chewing.

If your puppy treats the water spray as a game, don't use it - you'll need to find an alternative method to distract him from unwanted chewing.

Use the spray each time your puppy tries to chew a table leg, for example, and your puppy will learn that each time he chews certain things, a spray of water comes out of nowhere.

He'll get a 'shock' and he'll think twice about chewing the table leg in the future.

It won't harm him, he'll simply be startled momentarily and will probably look at you for reassurance; as he does, call him over to you and offer him a toy to play with or to chew.

Make the toy seem much more interesting than the boring old table leg and praise him when he shows interest in or chews the toy.

There is a spray on the market which can be used to coat things such as furniture legs, slippers, hands, clothes, etc. It tastes bitter and is meant to act as a deterrent to dog or puppy chewing.

Unfortunately, it doesn't work for all puppies or dogs as some continue to chew regardless; however, it may be worth a try if you're running out of ideas!

Although at first, puppy chewing may seem cute it needs to be carefully managed because if it's allowed to continue unchecked through to adulthood it will become a problem.

Just imagine the destruction from an adult dog chewing your furniture!

Right from the get go, teach your puppy the following:

We love our puppies, which sometimes causes us to overlook behaviour which we wouldn't normally allow, but it's important that we never allow our puppies get away with unwanted chewing or biting, even if it does seems cute.

The key to stopping unwanted puppy chewing is perseverance and consistency.