My Dog Doesn't Listen To Me! Why?

Hi there, our dog doesn't listen to a word we say and we need some help.

We have a ten-week-old cocker spaniel and during his first week in the house, we managed to toilet train him, and we managed to teach him to 'sit' and 'stay', and he's learned to play fetch very well. 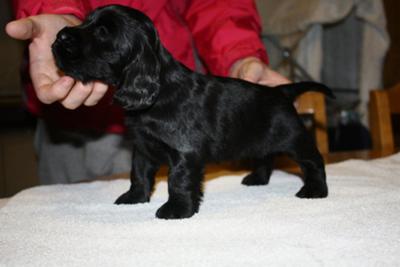 My dog doesn't listen to me!

However, this week, it is like he has changed his personality!

He has started ignoring the sit commands and will run off with his toys. I have been persevering with training, and we play a lot, so he doesn't get bored.

We feed him after we eat, and he exits rooms after us.

He is my first cocker spaniel, and I feel like I am missing something. I have been very patient, but he's not interested in food rewards.

You feel you've done all you can.

You've done all the training everyone recommends.

And yet, still, your dog doesn't listen to a word you say!

Your Dog Doesn't Listen to a Word You Say! Why?

I don't know much about you and your puppy (other than what you've already told me), but my best guess is that you're probably paying him too much attention.

I know he's only ten weeks old and is adorable - how could you not give him lots of attention?

However, if you give your puppy too much love and affection without him having to lift a finger, you will spoil him.

Dogs are like children; if you spoil them, they misbehave, and dogs that get too much attention often become challenging to handle and lose respect for their owners.

You're behaving submissively in your dog's eyes - he's wrapping you around his little finger, or should that be paw?

Pack leaders aren't submissive. Give him attention and lots of cuddles, but not every five minutes of the day. (I hear you - easier said than done when they're so cute!)

Does your dog listen to other family members, or is it just you that he ignores? If he listens to your partner (for example), ask yourself why. Does this person project themselves more as a leader and fuss less over your dog?

I don't think your cocker spaniel sees you as pack leader, and he's now just doing his own thing. He's not respecting you, and you need to get your 'relationship' with him back on track.

If this is the case, as well as turning down the 'spoiling', you might like to try the following:

Ten weeks is very young. He's still a baby and will need lots of obedience training to help him understand what type of behaviour you expect from him.

It's also important to understand that just because he's learned to sit doesn't mean that he will continue to do so each time you ask.

You must reinforce all the commands you've taught him so far and train him in different places and situations to strengthen each training command and ensure he continues to behave in the way you'd like.

Mix it up a little. For example, train your puppy in the garden, in a different room, and when you think he's mastered that, train him with a few distractions around him.

The next time you ask your dog to sit, and he ignores you and walks away, go and get him, bring him back and make him sit. This action will help to teach him that he needs to listen to you and that he won't be allowed to get away with ignoring your commands.

When you give those commands, keep it short and snappy. Don't 'sing-song' them or drag the word(s) out, don't shout, just say the word 'Sit'.

You're not asking him; you're telling him. This attitude may come across as harsh, but it's not really; it's for his own good (and your sanity!)

Make sure that all family members are using the exact command words and that they also don't allow your pet to get away with ignoring them.

There's no such thing as a free lunch!

Make your dog work for everything he gets; I promise you, you'll soon see a difference in his behaviour. As I mentioned earlier, dogs are just like kids, spoil them, and they will misbehave.

What do I mean when I say 'Make them work for everything'?

Well, ask him to sit before you feed him or better still, hand-feed him for a couple of weeks and make it a game. Hide a few pieces of his kibble and get him to sniff them out.

Before you play with him or allow him a different toy, call your puppy to you and ask him to sit or lie down. Teach him that nothing in life is free and that if he wants something from you, he will need to work for it - he will need to listen to you and act on what you say.

It helps them to feel settled and safe. You might want to set up a routine for your puppy, something like this one here.

Exercise Him: Physically and Mentally

Walk your cocker twice daily, or at the very least, let him run around in the garden.

Don't forget your puppy needs an element of mental stimulation, too; training, sniffing out treats, etc.

Don't let him get away with being naughty; otherwise, it will just escalate. Each time your dog doesn't listen and you don't reprimand him, he'll learn that it's okay to ignore you.

You must let your dog know you're not happy with his behaviour and show him the behaviour you want from him.

It's difficult not to pile on the love when you have a new puppy; they're so adorable! I advise saving the cuddles for the end of the day or before nap times. You can also reward your pup with a quick cuddle/pat instead of rewarding him with treats, which is the preferred option, and it's the healthier option too!

The more you spoil your Cocker Spaniel (and allow him to be naughty), the more he will disrespect and ignore you. He may begin to challenge you and develop behavioural problems as a result.

I sincerely hope this helps and would love to hear how you get on.

Thank you! Really appreciate the suggestions. We will all try harder to make sure he works for his attention!

It's my pleasure Jen - good luck!

Here are a couple more links to pages with some questions and answers on dogs not listening to their owners. (I'm sure we've all been there at some point!)