American Cocker Spaniels may be a little different from English Cocker Spaniels, but they're just as cute! Whilst their differences may not at first be apparent, once you know what you're looking for it will soon become clear.

Read on to discover the differences between these two wonderful breeds.

The American Cocker: A Potted History 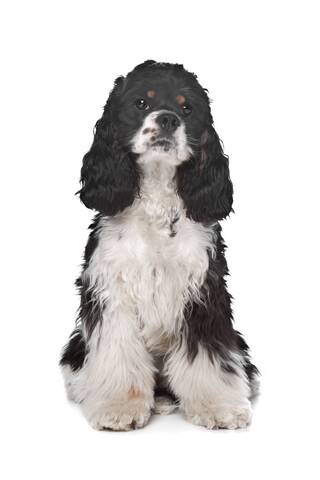 The American Cocker Spaniel was developed from the English Cocker around the 19th century.

Both breeds were initially bred as gun dogs and were used for flushing, pointing, and retrieving small birds such as woodcock and quail.

At first, they were differentiated by their size, and eventually, the smaller of the two became known as the American Cocker Spaniel.

As time went by, they were bred for different traits, and so their differences began to grow and become more apparent until, in 1945, both breeds were officially recognised in their own right, with their own breed standards.

In 1881 the American Spaniel Club was established, but it wasn't until September 1946 before they formally recognised the English Cocker Spaniel.

Both breeds are outgoing and very friendly, have a rather lovable nature, and are particularly good around children, making them ideal family dogs.

Cockers don't like rough training or handling (particularly from over-excited children), so the kids must understand how to behave around their pets.

They're intelligent and respond well to training; however, they are very gentle and can sometimes be a little sensitive. The good news is that you can go some way to reducing this sensitivity by thorough socialisation while they're still young puppies. 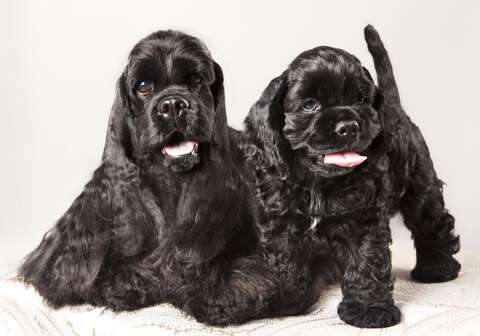 Both the English and American Cocker Spaniels are very eager to please and quite adaptable, making them easy to train for fieldwork, showing, or simply being our 'best friend'.

Although there are similarities between the American Cocker and its English cousin, the head and skull are very different.

The scull of the American Cocker Spaniel is much more rounded, and its muzzle is broad and deep-set and much shorter than the English Cocker.

Their ears are long and pendulous, low set, and are covered with long silky fur which can be straight or slightly waved. Unfortunately, both breeds are often prone to ear infections by their very design, but infection can easily be avoided if they're given extra attention.

It's also essential to keep their ears clean and dry, especially if they've been swimming!

Their eyes are one of their most appealing features; they're large, dark, round (rather than oval) and forward-looking, rather than set to the sides of the head.

Their look is alert, gentle and appealing.

The American Spaniel's eyebrows are pretty distinct and have a very definite stop, unlike the more gently graduated head of the English Cocker. Their back is shorter and gently slopes from withers to their tail.

The Cocker coat comes in three primary colour types: black, ASCOB (any solid colour other than black), and parti-colours.

The body of their coats (which can be flat or slightly wavy) is long, silky, and flows luxuriously to floor-length, and they're heavily feathered on their ears, legs, chest and underbelly.

A working dog needs to be able to chase through the undergrowth without being snagged on brambles and burs. If their coat is left long and flowing, that's precisely what happens, so it's best to keep a working dog's coat well-groomed and trimmed.

Both the English and the American Cocker Spaniel's coats need a fair amount of attention to stay in good condition.

I recommend brushing your dog at least two to three times each week (more if you feel inclined) and taking him to a professional groomer once every three or four months.

And if you'd like to learn how to groom your Spaniel yourself, you could save yourself a heap of cash!

The American Spaniel is a medium-sized dog; it's the smallest of the gun-dog group and is slightly smaller than its English cousin. 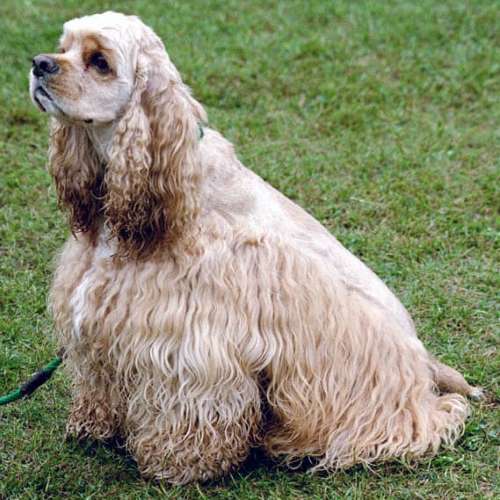 These Cockers are just as lovely as their English cousins.

It is sturdy, compact and muscular and has excellent endurance and speed, but don't let this dainty looking dog fool you; the American Cocker is a tough little canine!

Height is measured from the top of their shoulders straight down to the ground.

The recommended weight of an adult male American Cocker spaniel is between 11 and 13 kg (24 and 28 lbs).

As a general rule, the female American Cocker should weigh a little less because the adult female is slightly smaller than the male.

The average lifespan of the American breed is lower than its English cousins - somewhere between 10 and 11 years - although similar to the English, many American Spaniels live longer lives than the suggested 'average' figure.

To help you see the difference between the English and the American Cocker Spaniel, you'll find a brief outline and a gorgeous photo of an English Cocker below. 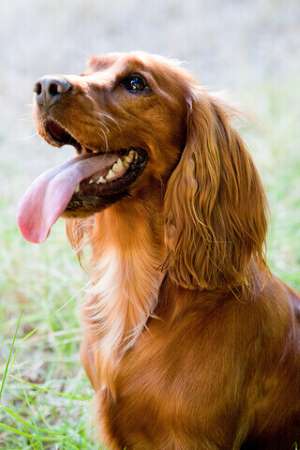 Generally, their ideal weight is between 12 to 14.5 kg, but that really depends on the dog's size and age, taking into account that females weigh typically less.

The average lifespan of the English Spaniel is somewhere between 12-15 years, although many do live longer.

My cocker, Max, is now 15 years old, and I fear the inevitable is nearing.

He's had pancreatic problems and has many growths on his little body. He's had surgery three times to remove the wart-like growths, but they keep growing back.

There will come the point where surgery is no longer possible, but I will keep on loving him until then!

He also has a huge lump under the skin on his underbelly, but the vet has advised that we leave it alone.

He is now totally blind and deaf, which has its challenges, both for Max and for me!

He sleeps for most of the day and no longer enjoys his long walks, so we take several short walks instead. He seems okay with this for now.

Both breeds are susceptible to a few health problems (as are most canine breeds) and are known to be prone to certain hereditary diseases.

One particular health problem is ear infections, and unless you keep your dog's ears very clean, bacteria will set up home, and once it does, it can be challenging to get rid of it.

Trust me, I know - it took over 6 months to rid Max of a particularly stubborn ear infection - learn to spot the signs of ear infection in dogs!

Both breeds can also suffer from eye problems such as progressive retinal atrophy (PRA), glaucoma, and cataracts and are also prone to conditions such as luxating patella and hip dysplasia.

According to the Kennel Club/British Small Animal Veterinary Association Scientific Committee, the leading causes of death in the American Cocker Spaniel are cancer, old age, cardiac, and immune-related diseases (illnesses that result from abnormal activity of the body's immune system).

Most of the information given on our website applies equally to both the English and the American Cocker Spaniel.

However, should you want more specific information on the American Cocker Spaniel, you can get it from The Kennel Club here.

If you'd like to read more about the English Cocker Spaniel's characteristics and temperament you can do so here.