There are many advantages to adopting a cocker spaniel rather than buying a puppy. We all agree that puppies are cute and adorable, so it's no wonder that once you've made the decision to get a dog, your first thought is of getting a puppy. However, an adult cocker spaniel has such a lot to offer, especially in terms of love and affection. In fact, there are many advantages of adopting an older dog.

I'm often asked for advice on adopting a Cocker Spaniel so I thought I'd write about it here.

How could you resist adopting a Cocker Spaniel as cute as me?

(The original question which prompted this article, and my reply, can be found here.)

Adopting an older dog doesn't necessarily mean that you're getting a dog with 'extra baggage', but unfortunately, there is a common but mistaken belief that dogs end up in a rescue centre because of behavioural problems.

Some do, but there are many circumstances where dog owners are forced, reluctantly, into giving their dog to a rehoming centre.

There are many good reasons for this, some of which are explained below.

Why Older Dogs Sometimes End Up In Rescue Centres

There are many reasons why adult cocker spaniels could end up in a rescue centre, and they're not all the fault of the dog.

If you're planning on adopting a Cocker Spaniel, it's a good idea to ask the rescue centre the reason for rehoming the dog. It would also be helpful to known how long he's been in the centre.

For example, if the previous owner was elderly and has sadly passed away, there is a good chance that the dog will have been well-socialized, fully house-trained, with no, or very few, problems. 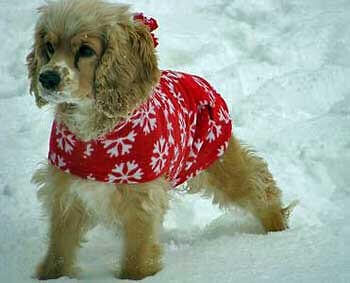 This gorgeous cocker spaniel is modelling her new winter coat - isn't she cute?

Another plausible reason for being in the rescue centre would be where the family had moved abroad but couldn't take their pet with them.

Unfortunately, if the dog arrived as a stray, the centre won't know much about the dog's background. They will, however, be able to assess the dog's health and temperament.

If the rescue dog has been with many different owners and is up for adoption once again, you may find that the dog has some behavioural problems.

In this case, you would need to find out more and consider whether or not you could manage such a dog. Alternatively, you could ask the rescue centre for help with finding an animal behaviourist or dog trainer, depending on the severity of the problem.

You may find that all the dog needs are firm guidance, lots of loving and plenty of cuddles.

Read about more reasons why dogs end up in rescue centres to understand that not all rescue dogs are problem dogs.

The Benefits of Adopting A Cocker Spaniel

There are many benefits attached to adopting a cocker spaniel dog rather than a puppy, including:

If you're adopting a Cocker Spaniel and it turns out that he has some bad habits, it could take a bit of time re-train him, however, it will be possible. 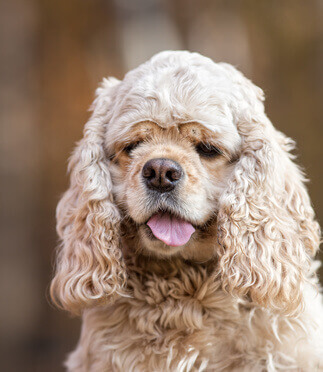 Adopting a Cocker Spaniel keeps dogs like me out of rescue centres!

Annoying habits such as peeing or pooping in the house, excessive barking, digging holes in your prized flower bed, or resource-guarding can be very stressful and often difficult to remedy without resorting to a qualified animal behaviourist or dog trainer.

The dog may be so traumatized that he no longer trusts humans and, as a result, he may have become unfriendly, even aggressive.

The dog may not have been socialized enough as a puppy and is either aggressive or scared of his own shadow.

When adopting a Cocker Spaniel adult dog, there are likely to be more trips to the vet because, as your dog's years increase, so do the vet bills.

The reason for this is because an older dog, at some point, may develop, for example, arthritis, diabetes, pancreatitis, which will need the care and attention of a vet more frequently.

However, we shouldn't overlook the fact that you will eventually have these costs when your puppy finally reaches his older years.

BEFORE Adopting A Cocker Spaniel...

Before adopting a Cocker Spaniel, it's a good idea to stop and give a little consideration to what will work best for you, for example:

When adopting an older dog, once you've got him home, take a moment to consider things from his point of view, for example:

Situations such as those listed above will create stress and anxiety for the dog, so we should be aware of them and try to help him settle in quickly and without stress.

When Adopting A Cocker Spaniel, Preparation Is Key

Prepare the house for when you bring your cocker spaniel home:

We can remove some of this stress by keeping the house quiet and bonding with him as quickly as possible.

There are a lot of things that you can do BEFORE you collect your adopted dog to make sure things go smoothly, and to help him settle in quickly when you bring him home.

There are a few things you can do to help him get used to his new home and family:

If all goes well, you should see your new Cocker Spaniel settled in nicely by the end of his first week.

Tips on Caring for an Older Dog

A Cocker spaniel's lifespan is between ten and thirteen years, but many dogs live much longer (my Cocker is now 14 years old and (almost) still going strong).

In the doggie world, if you're seven or eight years old, you're considered to be a senior dog!

As our Cocker Spaniels age, they will gradually begin to have health problems, which usually starts with their sight and hearing. However, an older dog may face other health problems, so it's a good idea that you make regular trips to the vet. I recommend twice a year.

It's better to give your ageing Cocker a few short walks rather than one long one. Keep a watchful eye out for stiffness in his legs or joints or a reluctance to go for a walk or climb the stairs (often a sign of joint pain). If you think your dog may have pain on movement, your vet will prescribe something to ease his stiffness or pain.

An ageing dog is also less likely to need the same amount of food to fuel his ageing body (although they will still hound you every time you wander into the kitchen!).

Cocker Spaniels are known for their tendency to become 'chubby' in their older years. As their lifestyle begins to slow, they don't need the calories they are used to having,  and because the dog is exercising less, they pile on the pounds, which is why it's advisable to change an older dog's diet.

Many dog food manufacturers cater for senior dogs with kibble that is low in fat and less protein but with all the nutrients for the older dog.

Many senior dogs may suddenly find themselves confused and alone in a rescue centre in their later years, usually through no fault of their own.

To make it worse, they often get bypassed in favour of a younger dog or a puppy.

However, there are many benefits of adopting a cocker spaniel from a rescue centre, and you'll be giving an older dog the chance to enjoy his golden years in a happy, warm and loving environment.

He will love you all the more for having rescued him from an unhappy end to his years. The love and bond that passes between a rescue dog and his rescuer are strong and very special.

So go on, add some happiness and sunshine to an adult cocker spaniel's life. There's one waiting just for you!

I mentioned earlier on this page that I often receive questions regarding adopting a cocker spaniel, and it was questions such as these that had prompted me to write this page.

As promised, here is my visitor's question and my subsequent answer.

We are considering adopting an old dog, a 10-year-old Cocker Spaniel. What issues could we expect to encounter? How can we make it a smooth transition?

The current owners are getting rid of her because they say she wants more attention as she gets older and that when they leave her alone for more than 10 hours, she acts out by pooping.

You're adopting an adult Cocker Spaniel rather than a puppy? Well, good for you! That's one less homeless Cocker to worry about being left in a rescue centre.

Whilst I believe all dogs should get used to being on their own for a while, I think that leaving her alone for 10 hours at a time (as her previous owners did) is far too long.

As for the problems or issues you may encounter if you adopt a cocker spaniel, I recommend that you speak to the adoption centre to get their opinion on the dog's history and temperament.

The staff should be aware of the dog's background and will be able to predict any behavioural issues you may face with the dog.

They'll also be able to offer you some good advice on managing behavioural problems the dog may have.

From what the adoption centre has said, it sounds like you don't have much to worry about, especially if you have plenty of time to devote to her.

If you follow my advice, it will help her to settle in quickly and bond with you. Give her the attention she needs (on your terms, of course) and don't leave her alone for too long. I think you'll see her toilet habits improve almost immediately.

I don't think you'll have any problems and I think she'll settle down nicely.

Ann, I hope my article has helped answer your questions and has given you some pointers to help you get your new Cocker Spaniel settled into her new home quickly and smoothly.

I wish you and your cocker spaniel the very best for the future!

Leaving A Dog Alone
By: Joseph

If you're thinking of adopting a Cocker Spaniel, I recommend you have lots of time to devote to her. The writer of this article (Pauline) is right when she says that 10 hours is far too long to leave a dog alone.

And when you do need to go out, if you can't take her with you, it's best if she's exercised first so that she can do her 'business' and will be relaxed while you're gone and will probably sleep most of the time.

Leave her some toys, some water, and maybe a radio playing, so she feels she's got company.

If you need to be out all day, Pauline recommends asking a neighbour to pop in and walk the dog or play with it for a few minutes.

If that's all she's doing, I don't think she's acting out at all, poor thing. Of course, she's going to poop or pee if left alone for that length of time, especially as her 'plumbing' is 10-years old.

I think leaving any dog alone for 10 hours is cruel. Imagine being alone every day for that length of time. It must be terrible for her.

As for wanting more attention as she gets older, why not? What's wrong with wanting a cuddle?