My cocker spaniel has started rolling in poop. My dog is 9-years-old this month and has revelled in dog poo three days in a row now.

Do you know why he is doing this, and how can I get him to stop? 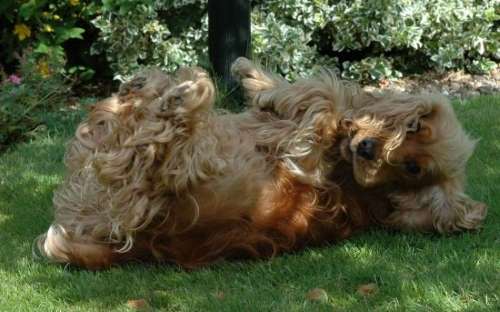 No one's exactly sure why dogs roll in poop and other strong-smelling substances, such as rotting carcases or fox pee, but they sure as heck love it!

They've been doing it for years and are likely to continue to do so!

Some of the theories I've come across are listed below:

How To Stop Your Dog Rolling in Poop

Stopping dogs from rolling in poop may not be easy, but you might like to consider some of the following:

The timing of your dog's correction is vital.

Catch your pet just as he's about to roll in the poop to make sure he associates the squirt of water with rolling in poop.

A word of warning though, you need to be sure that your dog is about to roll in the muck and not about to pee or poop as he may think he's being chastised for doing his business.

If your dog believes he's being chastised or punished for going potty, he may begin to mess in the house and in secret.

Hi, Can anyone tell me if fox poop is dangerous to our cocker puppy; his eyes, stomach, etc? Thanks!

Just like many other animals, foxes can carry parasites and spread disease. Although the threat of rabies was at one time real, nowadays, it is rare.

You're right to be concerned, but if you bathe your dog following contact with a fox, or its pee or poop, your dog should be fine.

Also, if a fox has been in your garden or yard, it's wise to clean that up too.

As long as you keep your dog up to date with his vaccinations, flea treatment and worming treatment, I think he'll be safe enough.

Here's a link to a website that will give you lots more information: Fox Project.

My cocker spaniel often rolls in poop. I've put it down to the fact that my dog is just so happy to be running out in the fields, and he likes to smell bad!

I'm fed up with having to bath him, and I don't think it's good for his coat.

I wash him in a particularly fragrant shampoo. Perhaps that's why he does it? I'll try changing his shampoo to a non-scented version.

Thanks for a great article!