Is Your Puppy Eating Poop?

The first time you see your puppy eating poop, you're shocked and disgusted; his cuteness factor drops through the floor!

Unfortunately, puppies and dogs eat poop occasionally. It's a fact of doggie life and is called coprophagia. However, the good news is that you can learn how to stop this disgusting habit and look forward to sweet-smelling kisses and puppy breath again!

Dogs Eat Poop: It's A Fact Of Doggie Life!

"My puppy won't stop eating poop - what can I do?"

"How do you stop puppies eating poop?"

"Help, my dog eats poop. Is this normal?"

I'm often asked questions like these, so I thought they deserved an explanation.

Coprophagia is the formal term for dogs eating poop, and they don't restrict their diet to eating their own poo; they will eat other animals' poop too!

Before you try to address the problem, it's best to understand why your puppy eats poop; otherwise, the danger is that he continues with this unpleasant habit!

How To Stop Your Puppy Eating Poop!

If your puppy's eating habits are causing you to despair, there are several things you can do to help stop it.

You might like to try one or a combination of methods shown below until your pup stops this anti-social behaviour. 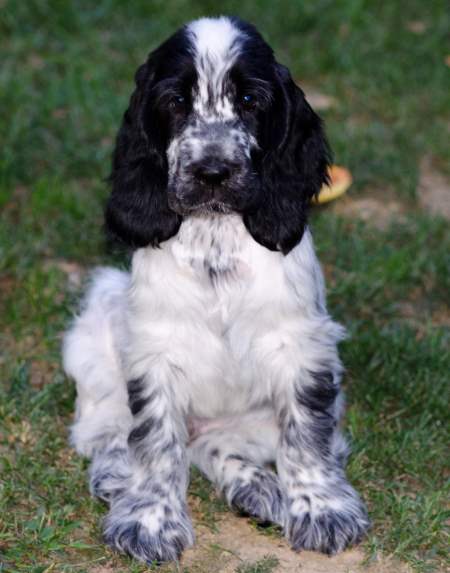 Puppy eating his own poop? Yuk, not me!

Is Your Puppy Eating Poop? - Pick Up ASAP!

Keep your dog's toilet area and playing area clear of poo. Do it immediately.

This may sound pretty obvious, but if you remove your puppy's poop as soon as it arrives, your Cocker won't get the opportunity to eat it later. 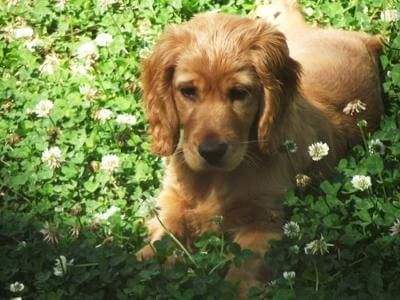 While you're cleaning up after him, try not to let him see you doing it; otherwise, he may mimic your behaviour (in the only way he knows how!).

Think about it, your dog sees you cleaning up the garden and begins to do the same because he thinks he's doing something you approve of.

Unfortunately, his 'picking up' involves your puppy eating poop!

Is Your Puppy Eating Poop? - Exercise Him!

By ensuring your puppy has plenty of exercise and play, you can be sure he'll be calm and relaxed and less likely to become bored. Boredom is very often when puppies resort to eating poop.

Play and training are great ways to exercise your puppy as they help exercise both mind and body, giving him the mental and physical stimulation he needs for development.

A well-exercised, tired puppy will be more content and (usually) well-behaved and less likely to become bored!

Is Your Puppy Eating Poop? - Train Him!

Teach your pet the 'Leave It' command and use it if it looks like he's about to approach something you don't want him to have. Once learned, this command may be just the ticket to stop your puppy eating poop.

As soon as your puppy has pooped (don't even give him time to turn around and sniff it), call him to you immediately.

Do it with such enthusiasm that he can't resist coming to you. Praise him and give him a small treat when he trots towards you.

If you don't want to feed him too many treats, make a big fuss of him and let him play with his favourite toy for a few minutes instead.

Giving your puppy something more exciting or rewarding to do will block his mind from any thoughts he may have had about eating his poop. 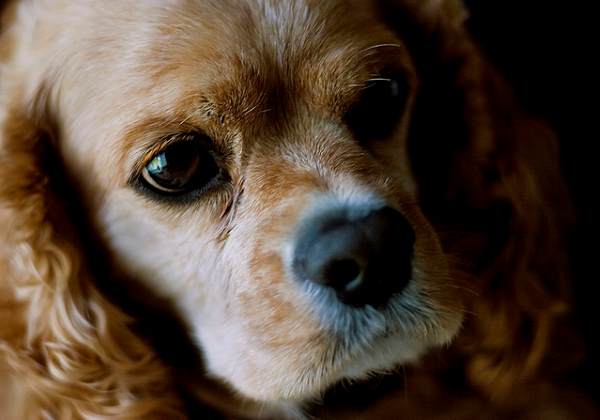 Timing is crucial when it comes to rewarding your puppy.

Watch your Cocker Spaniel, and as soon as he's 'done the business', you call him to you and reward him. This will help him to associate any reward with moving away from his poop.

If your puppy learns something good happens after relieving himself (and he leaves it alone), he's unlikely to begin munching on his poop. This is especially true if he knows you've something much more exciting for him.

After pooping, he'll automatically look to you for his reward. With a bit of luck, you'll no longer have a naughty puppy eating poop!

Consistency Will Help Stop Your Puppy From Eating Poop

As with most dog training, consistency is critical.

Try to be around your puppy whenever he does his toilet. It's the only surefire way you'll control what he eats in the garden.

TIP: If keeping your pet on a lead isn't going to work for you, why not consider using a muzzle when he's off the lead? This way, he can run around and exercise as usual, but he won't be able to graze on anything undesirable.

Once he's broken his coprophagous habit, you can stop using the muzzle.

Learn how to stop puppy eating poop? No need, I don't indulge!

If you're there to supervise him, you can react the minute he turns to sniff his poo.

If your pet is off the lead, you won't be able to keep a close eye on him. If he gets the opportunity to indulge in eating his own poo (or even another animal's), he probably will!

That's why I recommend you consider keeping your puppy on a lead until the problem is resolved.

Please don't unintentionally set your puppy up to fail.

If you're not around and your puppy has an opportunity to munch, he will take it; this will set him back, and any progress you may have made will be lost.

Consistency is the key if you're going to stop your puppy eating poop. 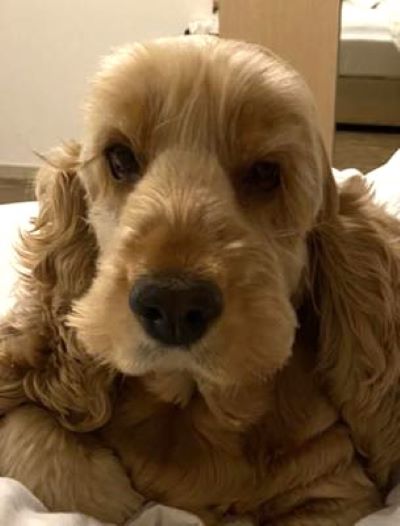 Hello, my name is Biscuit!

A Rattle Bottle Could Help To Stop Your Puppy Eating Poop

If none of the above work for your dog, you could try using a rattle bottle to help stop your puppy eating poop. Dogs don't like the sound rattle bottles makes.

If you don't know what this is, it's a bottle (or a tin) half filled with coins or pebbles. When shaken vigorously, each time your dog stoops down to smell or eat poop, the sound will shock your Cocker into stopping dead in his tracks.

Although the rattle bottle may work, I don't recommend using this method without seeking professional advice from a qualified canine trainer or animal behaviourist. It could make your pet aggressive if not appropriately used.

Use it as he's approaching the poop. It will be more effective this way. If your puppy has already begun to eat the poop, the rattle bottle is unlikely to be ineffective.

If your dog or puppy is practising coprophagia, it's best to speak to your vet before you try any of the above. You must rule out any underlying medical problem that may be causing this habit before going on to tackle his antisocial behaviour.

Why Is My American Cocker Spaniel Eating Poop?

By: Angela Johnson
From: Royston, Herts

Hi, My American cocker spaniel is 15 months old and loves to eat poo - it doesn't matter whose it is! If we take him for a walk, we usually let him off the lead, and if he finds a bit of poo, he'll eat it! He'll eat his own too!

I also have another American cocker, but he doesn't do it, thankfully!

I have read all the reasons you give, and I still can't figure out why he does it.

He's not bored. I feed him pedigree tinned dog food, he is wormed regularly, and I clean up after him as soon as he has done his business in the garden.

So I am stuck because I don't know why he does it?

Does anyone have any ideas, please?

Why Is My Cocker Spaniel Eating Poop?

If you're picking up after your dog as soon as he's done his 'toilet', then he must be eating poo when you are out walking, I'm assuming, while he's off the lead.

If you keep him on a lead until this problem has been resolved, he won't be able to eat poo. The less he feeds his 'habit', the sooner he forgets about it.

Your alternative is to muzzle your dog while you're out walking.

If your Cocker Spaniel is otherwise healthy and is not underweight (your vet can confirm this for you), there are one or two things you can do for him.

Change his wet food to dry kibble. You can read the reasons for doing so above.

You could try adding pineapple to his food or pineapple juice to his water because it's said that it makes their poo taste less palatable (?).

Split his meal allowance into two and feed him morning and evening to help keep that little tummy feeling full.

Dogs eat poop for several reasons. If you haven't already, read the following article on Coprophagia (this is the term for dogs eating poop) for more information.

Just in case there's something that you've missed, this article will explain more about how to stop your dog from eating poop.

Why is My American Cocker Puppy Eating Poop?

Why Does My Dog Eat Poop?
By: David M

Hi Angela, One of my cockers, Daphne, used to do the same thing. It's supposed to be that they can smell the undigested food in the poo and eat it.

They sell chewable tablets at Petco that seemed to do the trick. You give it to them, and it's supposed to make their poo smell foul, so they don't want to eat it.

Thankfully, Daphne doesn't do it anymore.

By: Jackie
From: Dublin

If you pick up after him in the garden, I guess it's not really a problem at home, so it seems that you've only got to worry about him when he's out at the park or on walks.

If you've tried everything and nothing has worked, then I think the only other thing you can do is to keep him on the lead when you walk him outside.

There is one last thing that you might like to try. Add a couple of chunks of pineapple to your dog's food.

Apparently, when it comes out in his poo at the other end, it's supposed to deter him from eating it. I'm not sure why, but I've read somewhere that it works! Give it a try. I hope it works for you!