Puppy crate training is one of the best things you can do, for both you and your pet. Despite what many people think, it's not cruel. You are providing your new puppy with a safe, comfortable space that's just for him!

Unfortunately, sometimes puppy crate training doesn't go as smoothly as anticipated. When this happens, owners often give up but regret it later!

What follows are a few of our visitor's problems that have cropped up when they were crate training their puppies and the advice that was given.

My Puppy Hates His Crate! 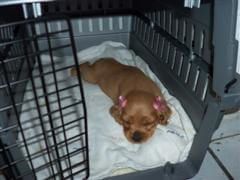 Puppy crate training at its best!

By: Gail
From: York

My 10-week-old puppy is sleeping in my 14-year-old son's room in his own bed, on the floor, but I want him to sleep in the kitchen.

How can I do this as I tried him in a crate for the first two nights when we got him at 8 weeks, and he cried all night and kept us awake. It seems as though he is not happy in his crate.

When we first brought him home, he was placed in the lounge in his crate, but he cried all night, so we moved him upstairs for a bit of peace and quiet.

He pees and poos on his puppy training mat, so that is okay. He just doesn't seem to like his crate.

What can I do to get my puppy to like his crate?

Unfortunately, teaching your puppy to love his crate will not happen overnight, and certainly not over two nights.

Crate training a puppy takes a bit of kindness, patience and know-how. Follow the rules, and your puppy will learn to love his crate.

You say you crated your puppy for the first two nights in his new home, but that he cried all night. Well, that doesn't surprise me. Your puppy is bound to be feeling anxious and stressed because he is young, is in a strange environment and is away from his mother and siblings.

He will need time to adjust to his new situation. Don't worry. With the correct care and attention, your puppy will soon get used to his new family and settle down.

Would you consider placing the crate into your son’s room so that your puppy can still be near your son during the night, at least in the short term?

If you're happy to give it another try, which I strongly recommend, you should read this article which will help you to settle you puppy for the night. 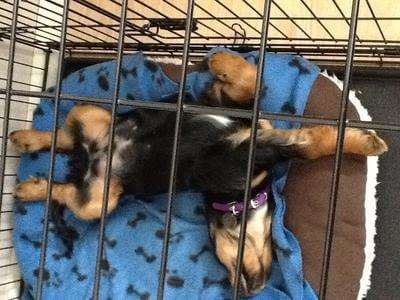 When it's your puppy's bedtime, you can cuddle him until he falls asleep and then gently put him in his crate, or you can put him straight in there and let him fall asleep on his own.

Personally, I recommend the latter.

Either way, when your puppy is asleep in his crate, move it quietly into the kitchen and leave it there.

Being in a crate can also help your puppy hold his bladder and bowels for longer, perhaps until you get up because dogs dislike soiling in their own den. As your puppy's crate will soon become his den, he will try his very best to wait until you let him out.

Make sure that you take him outside the minute he wakes, or it may be too late. Just in case you don't come across it, this article on potty training is helpful.

If your puppy wakes up and cries during the night, don't be tempted to get up and go to him. It's best if you ignore him. If you don't, he will soon learn that when he cries, you come running.

I hope this helps, but if not, please get back to me.

PS: This puppy crate training series is also recommended reading. It will give you all the information you need to help your puppy to enjoy being in his crate.

By: Camilla
From: Denmark

I have had the joy of owning my black cocker spaniel for almost two years. When we first got her, we were very sure she was going to sleep on her own.

However, two weeks after we picked her up, she ended up in our bed, and I have never slept better. She seemed to become very relaxed and calm the minute she was on my bed.

Animals (just like humans) need to feel connected to each other. Invite your cocker spaniel into your life, not in a crate.

Best from Vilma (the cocker) and her human, Camilla.

Have you tried tiring your puppy out before bedtime?

I used to play with my puppy for 30 minutes before bedtime. I'd then take him outside to do his toilet, and I would bring him back indoors and give him a cuddle.

Sometimes he would fall asleep within a couple of minutes, and then I'd put him straight into his crate. If he didn't drop off to sleep straight away, I would put him in there with his cuddly toy, and he would soon nod off.

I kept his crate by my bed, and if he woke during the night, I would slide my hand through the bars and stroke him, giving him a few words of comfort.

After that, I used to ignore him.

I would never take him out of his crate at night because he would learn that all he needed to do was cry, and he would have my attention. He would soon realize that I would go to him and let him out, and I would be making a rod for my own back.

I hope you get your problem sorted quickly, but the best advice I can give is to tire him out and ignore his cries. It worked for me!

Hope this has helped.

My Puppy Gets His Head Stuck In His Crate!

Puppy Chewing the Bars of His Crate
By: Anonymous

My cocker spaniel is 8 months old, and he sleeps in his crate, but he keeps chewing the bars and getting his head stuck between the bars, which makes him cry out and wakes us up.

What can we do to stop this?

Train your puppy to get used to his crate. It will probably take a little while to train him properly, but you will be glad of this because he will come to love it.

You could try placing a fine mesh over the bars until your puppy has grown a bit bigger. Do you think that might help?

Puppy Chewing the Bars of His Crate
By: Anonymous

Thanks Jackson, I'll give that a try.