One of the most important rules of crate training a puppy is to make sure your pup's experiences in and around his crate are positive; it's vital that he doesn't have any negative experiences, otherwise he may never accept his crate.

Follow these basic rules and crate training your puppy will be a breeze!

Our essential rules of crate training starts off with some simple tips to bear in mind to help you (and your pup) get it right, without any drama.

Let's take a look at them shall we? 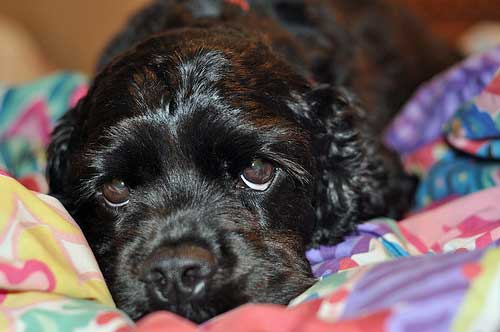 I love being in my crate!

Read on for more essential rules of crate training puppies to help your new pet settle into his crate quickly and quietly.

Any frightening or negative experiences your puppy has while inside his crate, or during crate training, and you're going to have set-backs.

One of the first rules of crate training a puppy is to make sure his experiences in his crate are all good ones.

You can do this by making your puppy's crate as comfortable as possible in order to entice him to use it.

A couple of soft dog blankets in the base and perhaps one of his favourite toys should do the trick. If you throw in a couple of small treats every now and then for him to discover accidentally, that will help too.

And don't forget a small bowl of water in case he gets thirsty.

If you bought a crate big enough for him when he's fully grown, your pup may (while he's still small) use one end to sleep in and use the other as his toilet. That's why  I recommend you section off part of the crate so that he can't do this. You can gradually increase the size of the usable area as he grows.

Now that it's nice and comfy, let's get on with understanding some essential rules of crate training to help you and your puppy get the best out of his crate!

Best Place For Your Puppy's Crate?

The best place to site your puppy's crate is somewhere where he can see what's going on. It needs to be lively, but quiet enough to allow him to rest and sleep without being disturbed. 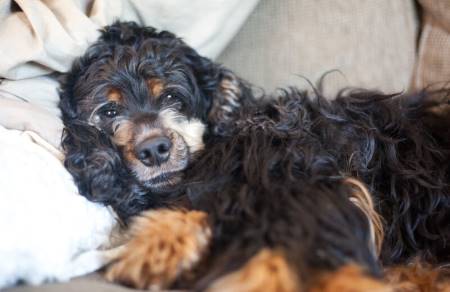 I'm comfy in my dog crate!

It goes without saying that it shouldn't be placed near a draughty window or door.

Apart from the obvious, he won't be comfortable and it will be almost impossible for him to settle down and sleep.

The best place for your puppy's crate is in a corner because it will help to keep him out of any cold drafts, he'll be able to watch what's going on, and it will create a comfy, den-like feel to his crate which will help him to feel more secure.

If you don't have a spare corner to use, the next best thing would be to drape a towel or a bed sheet over the crate, leaving the entrance open.

At some point you will want to lock your puppy inside his crate while you get on with your day.

One of the most important rules of crate training is not to lock the door on your puppy's crate until he's really comfortable with being inside.

This is really important.

Any negative experiences at this stage will set you back; you will undo any progress made to date and may not be able to move forward as quickly as you might like.

This is probably one of the most important rules of crate training a puppy. If your puppy cries to be let out of his crate, ignore him.

That's right, I said ignore him.

I know it sounds a little cruel, but if you give him attention when he 'demands' it, you'll be teaching him that each time he wants to get out of his crate, all he needs to do is cry!

Your puppy will learn that by using attention-seeking behaviour (his crying) he can manipulate you into doing what he wants...sneaky eh?

He'll most likely cry during the night (for a week or two until he's settled).

It's best if you take him out into the yard as late as possible and before he goes into his crate for the night.

This way, when he does cry at night you can be certain that he's not needing to pee.

If you're certain that your puppy wants to pee, take him straight to his toilet area and stay with him and encourage him to 'go potty'.

Don't fall into the trap of playing with him or making a fuss, otherwise he'll not pee but he'll want to play and enjoy your attention. The aim is to teach him that night-time is for sleeping!

If he doesn't do the business within 10 minutes bring him inside and put him back in his crate and leave him.

So the next time your little puppy cries during the night and you're certain that he's warm and comfortable, ignore him. I know it's easier said than done, but I promise you he'll soon drop off to sleep again.

Follow our basic rules of crate training above and your Cocker Spaniel puppy will take to his crate quickly and without fuss.

A crated puppy is a contented puppy! 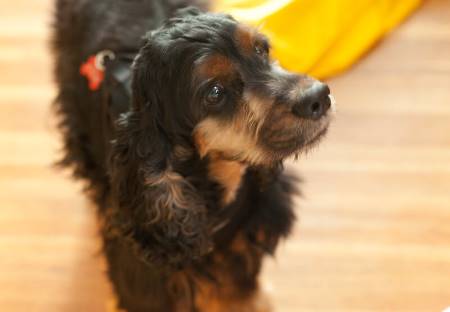 I love my crate, Mum.

Crating Can Help With Potty Training!

As an additional bonus, crating your puppy can be very useful if you're still potty training because dogs (and puppies) try very hard not to pee in their own den.

Make sure your puppy has no negative experiences whilst he's in his crate. Help him to view this space as his own personal den where he can be safe and comfortable.

Give Him A Room With A View!

Make sure his crate is placed where he can watch what's going on, but also where, if he's tired, he can fall asleep quietly without being disturbed.

Locking your puppy in his crate should be done very carefully and gradually, and preferably without him realising that you're doing it, otherwise he may become frightened.

Thus creating a 'negative' experience which is the last thing you want. Follow this link to discover the steps to closing the crate door.

Above all, crate training a puppy takes time and patience.

Take it slowly, step by step and your puppy will soon be coming in and out of his crate without being asked.