Picking A Puppy: How To Get It Right!

When it comes to picking a puppy, it's so tempting just to choose the first cute Cocker Spaniel that comes trotting merrily towards you.

But just like our children, puppies have different temperaments; they're all individuals with their own little personalities and some much easier to manage than others!

For example, you'll find Cocker Spaniel pups that range from being just a little subservient, to the very timid (so timid, they're scared of their own shadows!), and others that are very dominant in nature. 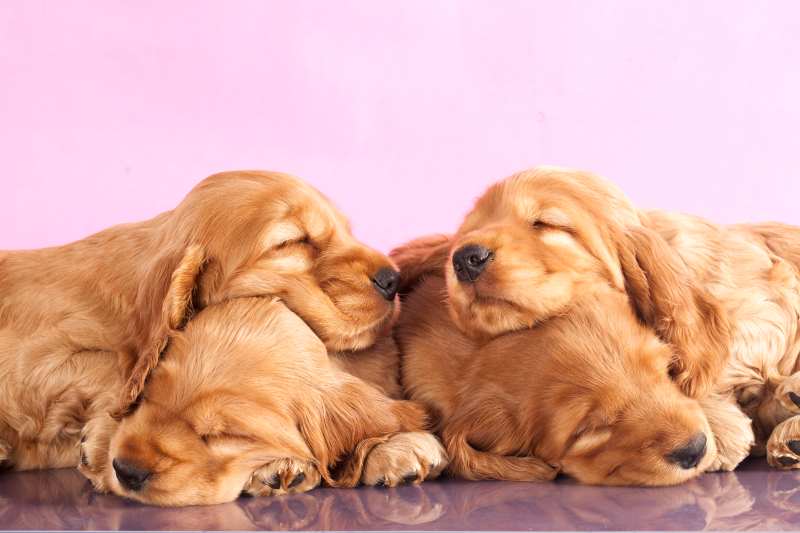 Oh, how could you choose just one?

Also, some pups can be fiercely independent, whereas others may be tiresomely dependent upon their owners and follow them everywhere. Yes, even to the loo!

In addition to that, and surprisingly, not all puppies like human contact. Some will deliberately move away to avoid being touched or stroked, some may patiently 'tolerate' human contact, and there are those that would love to be stroked and cuddled all day long!

All of these characteristics can have a significant impact on your puppy's future behaviour, and can predict how easy your chosen pup will be to train and to manage, and even how sociable he will turn out to be.

But how do you make sure that you pick a puppy that will be perfect for you and your family?

Well, there are some simple dog temperament tests that you can carry out (with the breeders permission of course) that will help to identify the pup's 'personality'.

A responsible breeder will have begun the important task of socializing the litter to help them become familiar with all the new and strange sights and sounds around them and to get them used to being handled by people.

The breeder probably already knows the temperament of all her pups and will most likely steer a first time owner away from puppies with a dominant nature.

I recommend you take advice from your breeder; however, if you'd still like to carry out your own testing, simply follow the steps below.

The ideal age for choosing a pup is when it is between 7 and 9 weeks when their personalities are beginning to show.

Bear these tips in mind when 'testing' the puppies:

The following temperament tests will help you to choose a puppy with just the right temperament for you and your family.

How Friendly Is The Pup?

It's always helpful to understand how friendly the pup is towards people and other dogs and this particular test should be carried out with at least one or two additional puppies and one or two people present, children too, if possible. 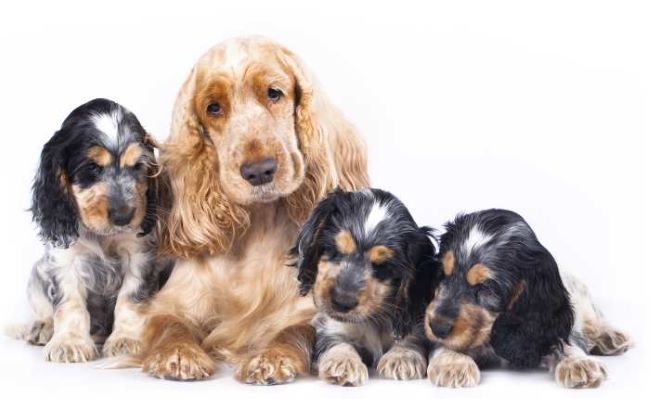 These are my lovely puppies, they're so sweet!

How does he interact with the other puppies and humans?

Does he play nicely without displaying 'bullying' or biting behaviours or does he trample over all his litter mates or try to nip at ankles and feet?

If he shows any inappropriate signs, such as growling, snarling, showing his teeth, curling his lip or holding his tail stiffly and high, I recommend you leave that one for someone more experienced, otherwise you really will have your hands full.

You may even end up with an aggressive adult Cocker Spaniel as a result of your inexperience!

Picking A Puppy: Dominant Or Subservient?

Picking a dog with a dominant personality is not necessarily a bad thing, but I'd never recommend a dominant Spaniel for a first time owner - not unless you're prepared to put in a lot of hard work training and disciplining and are prepared for many challenges! (or should that read battles?)

The same applies if you have young children because it's highly unlikely that they'll be capable of managing a headstrong Cocker Spaniel.

So, if you've never owned a dog before, I recommend that you choose a quiet, subservient pup, (but perhaps not the runt of the litter) as he will be easier to train and manage.

If you already own a dominant pet, you may want to choose a subservient puppy to help make things easier when you bring him home as a less dominant pup will settle quietly into your 'pack'.

Gently roll the puppy onto his back and stroke his tummy.

Lying on its back is not a natural position for a dog (it makes it feel vulnerable and uncomfortable) so there's a good chance that he'll try to get up.

If he struggles to get free, place your hand gently but firmly on his tummy and keep him there for about 30 seconds or so.

A dominant Spaniel will struggle wildly and try to get up, whereas a more subservient pup may struggle a little and then settle down.

If he doesn't struggle at all and/or licks your hand, you're almost certainly holding down a very subservient little boy.

If he's somewhere in between, for example, he wriggles for a few seconds and then gives up completely he'll likely be neither dominant or submissive (in my view, a strong candidate for the ideal puppy!).

Picking A Puppy: The 'Cradle' Test

Interlock your fingers underneath the puppy's tummy and gently lift him about 30 cm off the floor - his legs should be allowed to 'dangle' either side of your hands.

A dominant Cocker will wriggle like crazy and try to get away. He may even try to bite you!

Depending on the level of subservience, a less dominant Cocker will quietly allow himself to be suspended, or will squirm a little for a few seconds before submitting or he may stiffen or freeze.

Picking A Puppy: Is He Happy To Be Stroked?

To find out how much this pup likes being handled, pick him up and hold him securely in the crook of your arm, with his back facing up towards you. 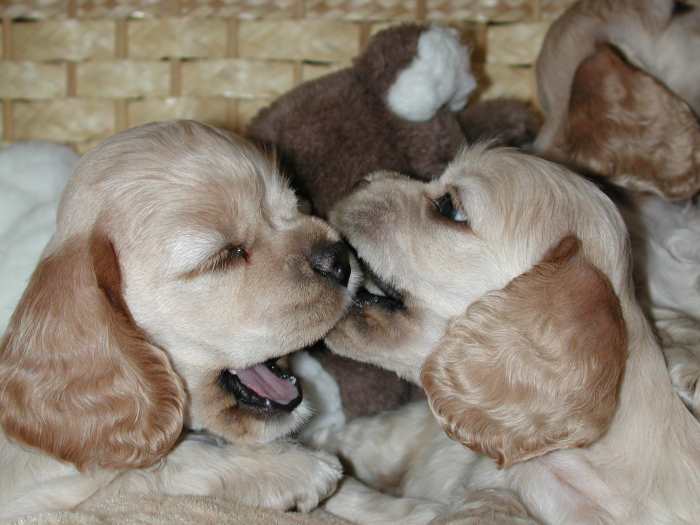 I love my brother!

With your other hand, stroke him firmly from head to toe. Be sure to stroke his head and fondle his ears, and pick up each paw in turn and squeeze gently.

A subservient puppy probably won't be too bothered by your handling and stoking.

A dominant pup however will object to being stroked, particularly on the head, and he probably won't like his paws being handled either and will try to pull away.

If you're looking for a pup that's fairly easy to manage and train, and a Cocker Spaniel that you and your family can give lots of cuddles and hugs to, picking a puppy that is happy to be handled is a definite must so choose a puppy with a subservient nature.

Choose A Cocker That's Not Too Independent

This test will help to confirm his level of curiosity and desire for your (people's) affection and attention....in other words, his independence.

Go to the puppy and get down to his level.

Make a gentle fuss of him, stroke him and talk to him for a couple of minutes and then stop.

Get up and walk away. If he doesn't follow you, clap your hands to get his attention.

You want him to follow you, instinctively and willingly.

If he follows you, but hesitantly, and with his tail tucked under or lower than usual, this pup is likely to be fairly submissive.

If he tries to get under your feet, nips at your ankles, or tries to run in front of you, he probably has a dominant personality.

Picking A Puppy: Do Noises Worry Him?

To test to see if loud, sudden noises bother him, make sure he can't see you, and then either clap your hands or whack a rolled up newspaper onto a table.

If he has more of a subservient nature, he may be a little curious and move towards the sound to find out what caused it, but a dominant pup may bark or will probably ignore the sound completely.

If he shies away from the sound, as if frightened, he may be too timid or may not yet have had enough socialization.

Picking A Puppy With A Low Prey Drive

If you've small animals in your household, guinea pigs, rabbits, etc., you'll need to know if the puppy's prey drive is high or low.

Roll a small tennis ball across the floor. If he pounces on it, or chases it, he probably has a high prey drive and will need to be watched carefully around smaller pets. If he ignores it, or simply follows it but doesn't try to pick it up there's a good chance he won't bother other pets in your home.

If the pup you choose has a high prey drive, you'll need to work very hard on the recall command, particularly if you plan to walk him in fields, off leash.

However, a well-trained Spaniel with a high prey drive is likely to make an excellent working dog!

The advice given here about picking a puppy assumes that all the puppies in the litter are plump and healthy looking. 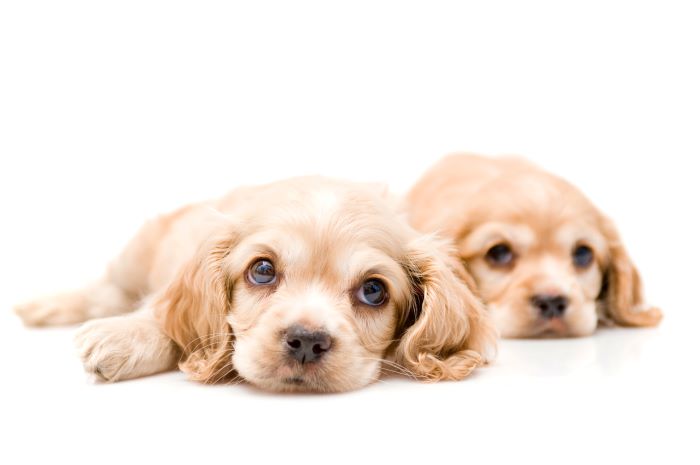 As soon as you've worked out what kind of personality and temperament the pup has, you'll be in a much better position to decide whether or not he's the right one for you. If he's not, re-do the dog temperament tests on another pup until you find your perfect Cocker. The tests don't take too long.

Personally, I'd always choose a pet that has a healthy curiosity, is not too timid, but not dominant either - somewhere in between the two is just right.

However, your choice is personal and should suit you and your circumstances. By taking the time to consider what temperament will suit you and your family, you'll be removing any element of 'chance' from picking a puppy.

If you'd like more on the subject of choosing your perfect Cocker Spaniel just follow this link.