Dog bloat is a very serious condition of the stomach and can be fatal if not treated immediately. Read on to understand the causes, symptoms and treatment because at some point in the future, it could save your Cocker Spaniel's life!

IMPORTANT: If you think your pet may have bloat, stop reading and take him to his vet right now. This condition is a medical emergency and the quicker you get him to his vet, the better are his chances of survival. Please don't delay, act now!

What Is Canine Bloat?

Bloat in dogs is a condition where the stomach becomes swollen, distended and very hard, usually as a result of abnormal volumes of gas, food or fluid. 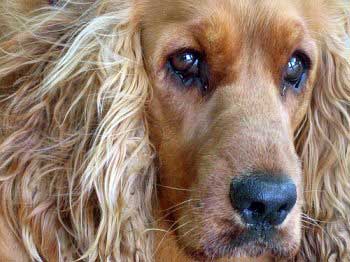 It's more than just having a full tummy.

As the stomach swells, twisting can sometimes develop between the oesophagus and the upper intestine. This is known as volvulus, gastric torsion or twisted stomach.

The dangerous combination of a twisted stomach and bloat is known as Gastric Dilatation and Volvulus (GDV) and is often simply referred to as bloat. The twisting causes air, food and liquid to become trapped in the stomach; nothing can move up or down.

As the stomach swells it puts pressure on other vital organs and restricts the blood supply until the organs are unable to function properly because of the loss of oxygen.

Gas continues to build up and without immediate treatment from the vet, dog bloat could prove fatal to your Cocker Spaniel.

What Are The Symptoms Of Dog Bloat?

Typical symptoms may include a tight, extended stomach, inability to vomit or belch, excess drooling, and general discomfort in the tummy area, but there may be additional visible signs such as:

As The Condition Worsens...

As the conditions worsens, you may see the following:

If your dog manages to be sick and/or can bring up wind, it's quite likely that the problem isn't Canine Bloat, but this can only be determined by your vet.

No-one really knows for certain what triggers canine bloat, but many vets and scientists believe the main causes are excess swallowed air (usually as a result of eating or drinking too quickly), overfeeding, and excess liquids.

Other causes may be: 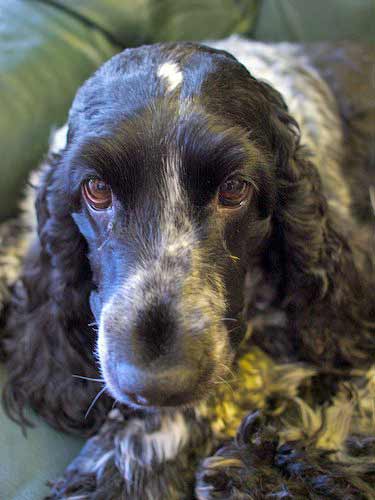 Dog bloat can be very painful for your Cocker Spaniel!

How To Prevent Dog Bloat

There are several things you can do to reduce the chances of your dog suffering from this potentially fatal condition.

Depending on the condition of your dog, your vet will do one of two things.

He may take an x-ray of your Spaniel's abdomen to see if his stomach is twisted or he may feed a rubber tube into his mouth and down into the stomach to release the pressure.

If a tube is inserted and there's a sudden release of gas and/or liquid, it will confirm a straightforward case of dog bloat (gastric dilatation).

The stomach will then be flushed and because your dog won't be allowed to eat for a day or so, he'll be put on an intravenous drip to help sustain him and keep him hydrated.

Where there's no release via the tube, an x-ray will probably show that the stomach has twisted (volvulus) and surgery will be needed . A gastropexy would be performed (where the stomach is pinned into place) and if necessary, any damaged tissue would be removed.

Bloat in dogs can also occur in puppies but it's mostly seen in older adult dogs. It's more commonly seen in the larger chested breeds such as German Shepherds or Great Danes, but it can occur in any dog with a large or deep chest.

It's not a particularly common ailment of Spaniels, but it's not entirely unheard of and if you learn to recognise the symptoms, not only could you save your own dog's life, but you may help to save another pet.

If you believe your Cocker Spaniel may be suffering from dog bloat, don't delay because every second counts - get him to your vet's surgery immediately!