OCD in dogs often presents itself as annoying behaviours. For example, you may notice your dog chasing his tail, snapping at invisible flies, or he may chase shadows beyond distraction. If you suspect your dog has an OCD problem and it's driving you mad, read on to learn more about canine compulsive disorders.

What is OCD in Dogs?

OCD in dogs, 'What's that?' I hear you ask. Well, it stands for obsessive compulsive disorder and, yes, dogs can suffer from this obsession as well as humans.

Obsessive compulsive disorder in dogs is an excessive habitual behaviour, such as: 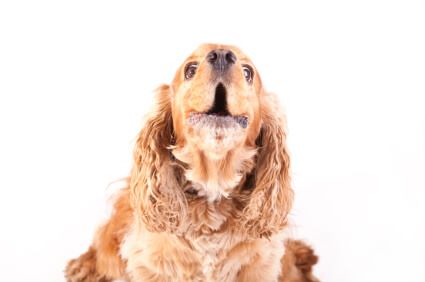 Many dogs may chase their tails, chase shadows or bark, but it doesn't necessarily mean that they have an OCD problem.

What does define the compulsive disorder in dogs is the frequency and length of time that your dog indulges in the behaviour.

If it gets to the point where he can't stop or it interferes with his normal day to day functioning, then it's time to see a vet.

If your cocker spaniel begins to behave in this way, it must be addressed quickly, otherwise it will only get worse.

Obsessive compulsive disorder in dogs can be triggered by many things, but don't worry, it can often be helped with some training and a bit of patience.

I recommend you speak to your vet first.

He may give you a step by step guide to help stop your dog's OCD behaviour and, depending on the how severe his obsession is, the vet may also prescribe medication to calm your pooch down.

The sooner you begin treatment, the easier it will be to reverse the habitual behaviour, allowing your Cocker Spaniel to get back to normal.

Possible Reasons for OCD in Dogs

Obsessive compulsive disorder in dogs can be difficult to diagnose because there are many neurological or physical reasons for his obsessive behaviour.

Some of the more 'obvious' and easily identified reasons for your dog's OCD are as follows: 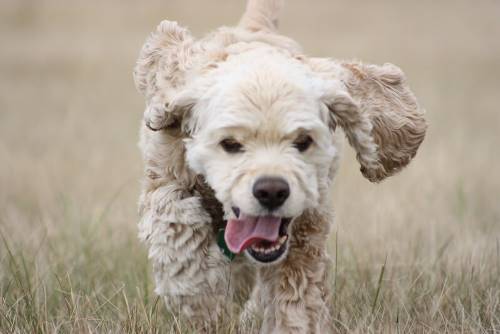 Possible Treatment for OCD in Dogs

Your dog shouldn't be scolded for chasing shadows, lights or reflections, (no matter how annoying!) as he can't help himself.

Your vet will give you instructions on the best way to treat your dog's OCD and may suggest something along the lines of immediately distract your dog the next time you notice your dog's OCD surfacing.

The distraction could take the form of a loud noise such as clapping your hands to 'shock' your Cocker Spaniel into stopping in his tracks.

If your dog stops what he's doing and turns to see what made that noise, turn around and walk out of the room. If he doesn't follow you, go back into the room and try again.

But I promise, he will eventually follow you. When he does, praise him and give him a treat, play a game with him, give him his favourite toy to play with, or take him for a walk.

What you are doing here is distracting him from the activity of chasing shadows, or the obsessive compulsive behaviour he was engaging in and rewarding him for his 'new' behaviour.

When you're out walking with your dog, don't let him focus or obsess on shadows. For example, he may catch sight of his own shadow or a reflection and he may begin to obsess.

If this happens, stop walking with him and stand still. The minute he looks up at you to see why you've stopped walking, praise him and walk quickly away from the spot. Keep him distracted with praise and a treat and continued walking/playing.

Behaviours such as OCD in dogs won't disappear overnight. It may take a few days or longer (depending on how obsessive he is) and it may return; a sharp, moving reflection may trigger his compulsive desire to chase it.

If your dog's OCD does return, begin the exercises again. The most important lesson to come away with here is to keep his mind stimulated and his body well-exercised.

If your dog is 'too far gone' your vet may refer you to an animal behaviourist for more professional help.

If your dog is chasing shadows or showing any other obsessive behaviour, don't scold your cocker spaniel, he can't help it.

Your first port of call must be your vet.

Whilst it's good to be aware of OCD and any treatments available, you shouldn't try to diagnose or treat your dog's OCD yourself. Your vet will always be the best person to diagnose and treat your pet's symptoms.