By: Harkin
From: Scotland

I have a question about ear infection in Cocker Spaniels.

My 9 year old Cocker has been to see his vet and was diagnosed with an ear infection, however, because of this he has lost the sight in one eye.

My vet prescribed a course of antibiotics which is now complete and I believe my dog still has an ear infection. 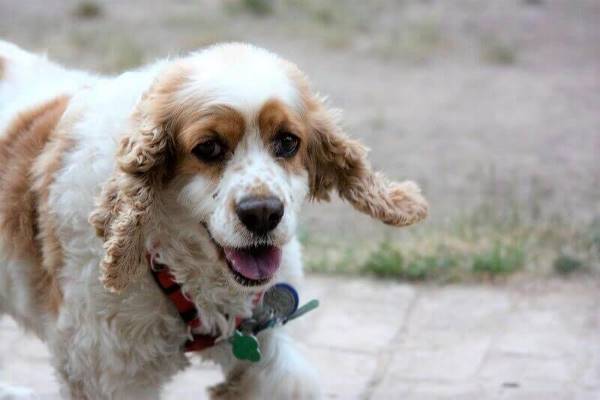 While I am cleaning his ears, a black hard gunge is coming from his ear.

I returned to my vet and told him of my concerns. He told me that there wasn't any infection my dog's ears.

Should I seek a second opinion, as I believe there is an ear infection in my cocker spaniel's ears.

If you feel strongly enough about this, you should get a second opinion - even if it's just to put your mind at rest.

Cocker spaniels often suffer from ear infections, so it's essential that you keep his ears free of excess hair around the inside of the ear. It's also important to keep them clean.

Our Cocker had an ear infection (in both ears!) for over six months - it simply wouldn't budge - no matter what the vet tried.

Eventually, out of desperation, I tried an antibacterial ear cleaner from our local pet shop (£3), and the ear infection disappeared within two weeks!

Our vet now uses it in her practice!

Since the infection, Max produces quite a lot of wax in his right ear - it's dark, almost black, and looks terrible. At first, I thought his ear infection had returned, but my vet reassured me that it was just wax.

I need to clean his ears every day to stop the wax from building up. If I don't, the build-up of wax becomes impacted, and he ends up in the vets again for an ear syringe - and that's not cheap because it means he has to go under an anaesthetic!

I really hope you get things sorted soon.

I have two AKC cocker spaniels, a 4-year old female and a 4-month old male cocker.

I've had four Cockers in my life and, they've had problems with their ears. I finally got tired of spending so much money by taking them to the vet for their ears.

So one day, I went into the Vitamin Shop and found something to treat my dog's ear infections, and I will share that information with you - I've been buying it ever since, and it really has helped my dogs.

It's the best product to use on cocker spaniel ears.

I recommend you try it - you'll be glad you did.

I don't have to take my dogs to the vet anymore as they no longer have problems with their ears.

It's pain-free and will help your dog rest better.

My cocker Spaniel had a couple of ear infections. I couldn't keep his ears clean until I was told about Thornit.

I used it for three days after which his ears were clean and no longer smelling nasty.

We have had 3 cocker spaniels, but now we only have our beloved 9-year-old, Heidi.

We have had many years of frequent visits to the vets for diagnosis and treatment. We were given medication for yeast infections, W/antibiotics/Otomax. (Don't give RX Prednisone.)

Then came the diagnosis of allergies, and we were told to put her on RX dog food.

We weren't happy, so we changed vets and were later told that the cause of the problem was cauliflower ear, read-up on it.

He sent us to a surgeon. We had one ear canal ablation surgery, and it cost over $1,500. A nerve was nicked during the surgery, and she lost her vision in one eye.

I can honestly say from the bottom of my heart I feel like we have mutilated her.

She was given massive amounts of pain medication following her initial surgery and also after the second surgery. It was horrible to see her in such pain and distress.

That side of her face now has a droop similar to that of a stroke.

She still constantly scratches at her ears, and they are smelly, and she's now totally blind (as of last week).

She never returned to the actions of a puppy as we were told she would. Today, she sleeps or wanders around the house, and she lacks any kind of pep.

In hindsight, I don't think we did the right thing for her.

Our Cockers weren't meant to be put through so much stress and pain. I am so sick about what we have done.

I am now searching for an article on "quality of life" to help me to decide what I do next for her.

Really think about it first - ear infections can be very painful for a dog.

I sincerely wish you the best.

The surgery is the only thing that would cure her ear infections. Don't go through years of what we did.

Just make sure you can live with what you put the dog through just to stay alive.