How To Stop Your Dog Barking In The Garden

A dog barking continuously can quickly become a nuisance. If your Cocker Spaniel becomes a vocal demon when he's let out into the garden, it must be addressed.

Barking dogs are not only a problem for you; they can also be a problem for your neighbours, especially if they work from home! Read on for a couple of sure-fire methods to stop your dog barking in the garden quickly and easily.

Stop Your Dog From Barking In The Garden

Now I'm the first to admit a barking dog can be very annoying, especially if you're enjoying a bit of quiet 'me time' on your garden lounger.

The sound of next door's dog barking (or your own!) is the last thing you want to hear! However, dog barking is a natural canine behaviour, so when your dog barks, there's usually a reason for it.

If you know why your dog is barking, you can then decide on the best solution to stop him. 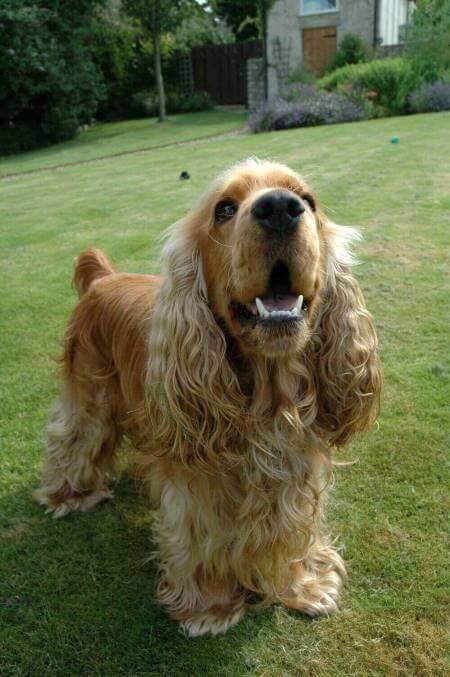 Thankfully, Max no longer barks in our garden!

Reasons for Dog Barking in the Garden

Most dogs bark. It's their way of communicating with us and their world around them.

Some dogs will bark at anything that moves; birds, squirrels, leaves, a stray plastic bag flapping in the breeze, and sometimes even their own shadow!

To some dogs, the sound of children playing close by is enough to trigger a bout of frenzied dog barking, especially if the children are excited and all the dog can hear is high pitched squeals and laughter.

Sometimes, people walking past your home or garden may be enough to trigger a little vocal chorus.

One thing I do know is that if your dog's barking is driving you mad, you're not alone. Let's see what we can do about it, shall we?

Sometimes our dogs bark because they're excited to be outside, they're being territorial, or simply because it's become a habit.

Believe it or not, how you let your dog out into the garden can have a massive impact on his barking. 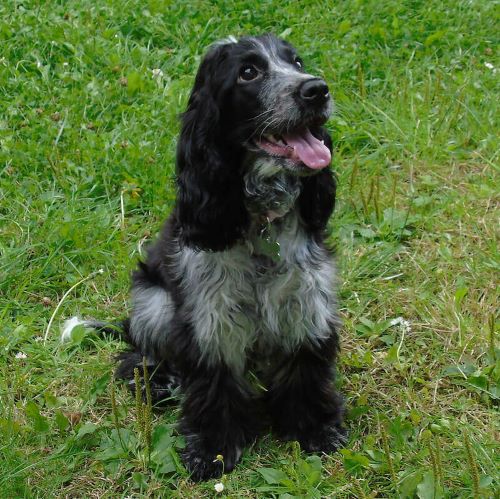 If your dog is excited, he will likely bolt through the door and begin barking automatically, simply because he's excited.

If your dog is calm, he'll step into the garden and begin sniffing or trot quietly to his toilet area and 'do the business'.

Obviously, you don't want your Cocker to bolt through the door.

The ideal situation is for your dog to sit calmly at the door, watch you open it, remain sitting, and only go through the doorway when you allow him to.

Time to break that bad habit before it drives you and your neighbours mad!

Teach Your Dog to Sit and Wait Before Being Allowed Outside

You'll need a long training line for this exercise to allow you to take control of your Cocker Spaniel without chasing after him, should you need to do so.

The first step is to teach your dog not to explode out of the door into the garden.

If your Cocker rushes past you the minute you open the door, likely, he's already excited and in hyper mode; this in itself can cause your dog to bark.

Walk him around the garden, let him do his business and have a sniff about before bringing him inside again.

I think you'll find that your dog won't bark but will do his toilet and explore the garden.

As a result of the above training, you are calming your dog and reducing his excitement before he gets into the garden, and it's often this excitement that triggers dog barking in the first place.

If your dog begins to bark in the garden, bring him inside immediately, leave him for a couple of minutes and try again. (You want to teach him that if he barks, he gets brought inside and isn't let out again until he's quiet).

Until you have your dog's barking under control, don't allow your Cocker Spaniel to play in the garden, or do his toilet, unless you are with him and he's on his long lead.

It's always good to see this in practice first-hand, so here's a great video which does just that.

I hope you enjoy it.

How To Stop A Dog From Barking In The Garden

How I Stopped My Dog Barking In Our Garden

When I lived in the UK, we had a delightful family with young boys living next door.

The boys would play football and noisy adventure games in their garden.

My Cocker Spaniel could hear them but couldn't see them, and the sound of their playing used to drive him wild. He just wanted to join in the fun.

His whining and barking became a nuisance and drove me up the wall (and probably my neighbours). I spent weeks running out into the garden with a bag of goodies or chopped chicken from the fridge shouting 'biscuit!' to distract him.

There are different ways to stop your dog barking in the garden, and depending on his reasons for barking will determine what works best.

At first, I had to get up real close and let him see that I had a treat for him, but I didn't give it to him immediately (otherwise, he would have thought I was rewarding him for barking).

Instead, I 'teased' him with it and made him wait a few seconds by walking away from the sound of the playing children. Once he saw the treat, he would stop barking (result!) and come running to me.

I would ask him to sit, and after he'd been quiet for a few seconds, I'd reward him.

Because there was a suitable time delay between his barking and being given a treat, he believed he was being rewarded for coming to me and for sitting, not for barking.

I guess what I was doing was distracting him from the task at hand.

I sometimes used a toy and played with him for a few minutes.

Enough distractions like this eventually broke his barking habit, and he learned that being quiet gave him cookies, yummy titbits or play. Eventually, he stopped his barking in the garden.

I'm taking care of a two-year-old Labradoodle at the moment. She's so adorable, but she barks at anything that moves. Unfortunately, she's setting Max off again, so every five minutes or so, I'm running out into the garden, waving a goody bag like a mad woman and shouting 'biscuits!'

I'm not sure what the French think of their new English neighbours!

I hope you've managed to find something here to help with your dog's barking.

As with any dog training, the key is to remain consistent and reward your dog for his good behaviour.

As soon as you hear your dog bark or you spot the signs that he's about to, deal with it; don't let him get away with any behaviour that you feel is unacceptable.

If you can get to your pet before he barks (watch for the signs), you've more chance of stopping him before he 'gets into the zone' of barking. It's much easier to head it off at the pass than to deal with it.

No matter which method you use to stop your dog barking, once your Cocker Spaniel becomes silent for a few seconds, if you reward him with plenty of praise and perhaps a treat or playtime, it won't be long before he learns that being quiet gets him the goodies.