How Much Is Too Much?

Questions about Cocker Spaniel pooping schedules are often asked by new and inexperienced puppy owners. They are worried that their pet is either pooping to much, too often, or during the night. Hopefully, some of these questions and answers will help to reassure worried pet parents!

My cocker spaniel is pooping too much, at least 8 or 9 times every day. Is this normal? He's eight months old and I feed him on dry food.

Is My Cocker Spaniel Pooping Too Much?

Hi, If your cocker spaniel is pooping too much you may be over-feeding him.

However, you don't say how much you feed him, or when, so I've not got a lot to work on here. However, I'm often asked this question so I thought I'd try to give a generalized answer here. 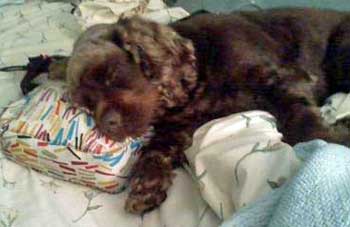 Puppies poop - it's what they do!

If your pup's poop is soft, you may be overfeeding him, especially if he's pooping 8 times each day - it is slightly over the 'norm'. Soft stools are very often an indication that a dog is being fed too much.

Where a puppy has regular diarrhoea, it's best to take him to see his vet as he's the best person to diagnose and treat any puppy.

There are several questions that need answering here:

Ideally, your puppy should be fed either once or twice each day. It would probably be a good idea to check the manufacturer's packaging just to be sure that you're feeding him the right amount of kibble for his age.

If you're uncertain, ask your vet who will be able to advise you.

Personally, I would split your puppy's food allowance into two; feed him one half in the morning and the other half in the evening. If you prefer to feed him just once each day, that's fine also. It's personal preference.

If you're still training your puppy, it's okay to him a training treat or two as a reward, unless he's overweight, in which case, you will need to take care.

If your puppy is overweight, why not use a small handful of kibble from his daily food allowance as a reward for getting his training right? This way he won't be eating extra calories!

I suspect your puppy is being overfed, (I may be wrong) and I believe that once you've got the amount you feed him under control, and a regular feeding time(s) established, together with daily exercise, it won't be long before your puppy's toilet times and frequencies settle down.

Hope this answers your question, but if not, please feel free to come back, but with a little more detail this time. ;)

Cocker Spaniel Pooping Too Much!
By: Den

Sounds to me like he's being a bit spoiled and is getting fed more than he should be. Not that I blame you - I'd do the same if I had an adorable little cocker spaniel puppy! :-)

If you feed him only what he's supposed to have for his age, plus as Pauline has pointed out in this article, a few training treats each day as a reward for getting his training right, he should be okay.

Cocker Spaniel Pooping Too Much!
By: Tanya

I was so guilty of over-feeding my puppy when I first got her. I just loved her so much and couldn't say no. She got lots of treats and tit-bits from me ever day.

And, yes she pooped a lot, but worst of all she got fat!

I felt terrible. It was all my fault. She's lots better now and I am very strict with her food and limit her treats to one or two small biscuits each day and the occasional (probably weekly) dental stick.

I now understand that I was doing damage to her body and her organs by feeding her too much.

Now, I just give her lots of love!

I have an adult cocker spaniel pooping overnight and I'm at a loss to understand why! She only seems to do it at a certain time of the year.

During the summer she's walked lots and we have no house-training issues, but as Autumn closes in, she is reluctant to go out in the rain (really, it is her not us!) or in the dark.

Even when we make her go out, she still does not poop as she would normally.

Inevitably we wake up to an occasional unwelcome present in the hall (which is where she sleeps) because she can no longer hold it.

She appears to know this is wrong, but it happens every year at this time.

Generally she's a well behaved dog, intelligent and eager to please, so otherwise it is totally out of character.

I don't think it helps that we spend half the year in France and half in UK and the move coincides with this time of the year.

Can anyone shed any light on this please?

Cocker Won't Poop In The Rain
By: Anonymous

I know lots of dogs that won't go out in the rain or the dark. I think you just have to persevere and continue with the walks. She might just grow out of this as she gets used to walking in the rain or at night.

Have you tried putting her in a crate overnight? Dogs very rarely poop in their own bed - she may hold it in longer because of this.

You could also try getting up an hour earlier and taking her straight outside. If you can do the same in the evening, one hour later, you might have it sorted.

Have you considered that this might coincide with the clocks going back? Is it possible that her own body clock is out of sync and needs a little time to adjust?

Thanks for that, I think you may be right.

Also, when she was a puppy we made it very clear that noise at night was unwelcome, so I think we have ingrained in her not to wake us up.

So if she gets the urge during the night or early morning she won't ask to be let out.

I now get up and let her out about an hour earlier in the mornings and we take her out last thing at night and make a big fuss of her if she poops.

It seems to have resolved the problem but we'll see this spring when we go back to the UK!