Puppy Peeing In His Sleep

My Puppy Wets His Bed! 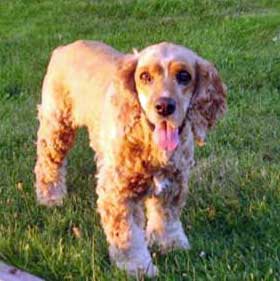 I don't wet my bed...honestly!

Puppy Peeing in his Sleep
By: Michelle
Clearwater

Kosmo, my 6 month old male puppy is peeing in his sleep. He was recently neutered and there were no problems, however, over the last few weeks, Kosmo has been having nightmares and he's wetting himself while he sleeps.

Please give some advice, many thanks.

Kosmo My Puppy Peeing In His Sleep
By: Pauline (Web Owner)

It sounds like it could be a post-neuter urinary problem, possibly an infection, but I'm not a vet and certainly not qualified to make this diagnosis.

My advice would be to go back to your vet and explain what's happening. He may want to do some tests to check for infection. At least then you'll know for sure and be in a better position to treat the symptoms and get rid of any infection.

As for the 'nightmares' - it's true that dogs (just like humans) can dream and do have occasional nightmares. However, it's more likely that he's dreaming of chasing rabbits or playing with other dogs. I wouldn't worry too much about it Michelle.

Don't be tempted to wake your dog from a nightmare (or even normal sleep) as roused dogs can often be dangerous.

Waking your puppy may cause him some confusion or may frighten him, but if you really want to wake him from one of his nightmares, try calling out his name, or clapping your hands at the same time as saying his name.

It's probably unlikely that your puppy is having seizures, but if you're going to see your vet anyway, why not video tape your dog when he's next asleep and having a nightmare. Make a note of what and when he was fed and how much he drank and what has happened during the day.

When you visit your vet, you may well have enough information to allow him to make a quick and easy diagnosis.

Dreaming of Chasing Rabbits!
By: Janie

Are you sure your dog's not just dreaming about chasing rabbits? My dog often does this. To the uninitiated, it looks like he's having a nightmare, but I know he's dreaming he's running and chasing small animals. His legs are twitching and moving; sometimes you'd think he was running in his sleep. He also whimpers. It sounds really sad to hear but I know he's okay.

As for your puppy peeing in his sleep, perhaps restricting his water just before his bedtime would help?