The Benefits of Neutering Dogs

Many vets automatically recommend neutering dogs because they believe that it can help to prolong your pet's life, reduce health problems and increase their general well-being. Learn more about the benefits of castrating or spaying your dog.

The term ‘neuter’ is generally used to describe castration and/or spaying. 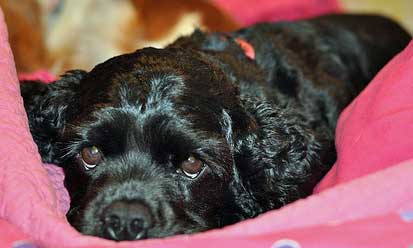 Castration is the surgical removal of testicles from a male dog.

Spaying is the surgical removal of a female's reproductive organs.

Both procedures will stop the dog from reproducing.

If you need persuading, here are some of the benefits of having your little fella castrated. (This is where all the guys become a bit squeamish...understandably so!)

One of the principal reasons I had Max castrated was because he was becoming increasingly frustrated around bitches in season when his behaviour would change dramatically.

He went off his food (which until then was unheard of!) and would pine and wander around the house all day long. He whined to be let out into the garden and within a minute of being let out, he was back at the door, whining to be back in again! 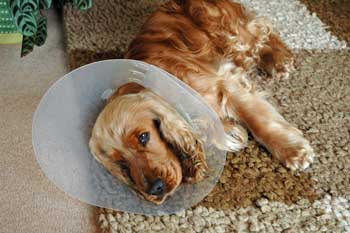 Max, giving me the 'evil eye' after having him neutered!

He was also becoming aggressive towards other male 'intact' dogs.

One day, I noticed two hard lumps around the base of his penis, just above his testicles. These would appear when he became 'anxious' and disappear again when he settled down.

I thought Max was ill so off to the vet we went. I explained the symptoms and showed him where the lumps appeared. He smiled and reassured me that Max was okay. He told me that the lumps were glands which enlarge and engorge when the dog became...erm... 'excited'. Imagine how embarrassed I was when I realized what he meant – talk about being naïve!

Oh well, you live and learn I guess. 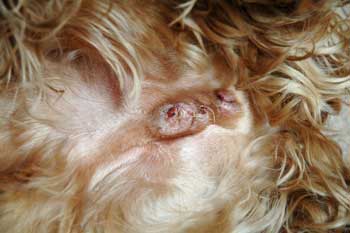 I took some time to think about it, but in the end decided it was probably for the best.

The operation didn't take long and he was up and about within a few hours, although he did look sorry for himself for a day or two.

(But take a look at his (accusatory) expression in the photo of him wearing the cone post-op (above) - he makes me feel so guilty...)

In reality, he was fine. He was more bothered about the cone he had to wear around his neck!

There were several stitches in the 'wound' which did look a little gory for a couple of days, (see above) but it soon healed and now that his coat has grown back there's nothing to see at all!

Neutering dogs can help to reduce aggressive behaviours and a neutered dog is also less likely to develop food aggression or resource guarding.

Timely neutering can help to stop problem behaviour developing but it's not always guaranteed.

Your dog is less likely to develop anti-social behavioural problems if he or she is neutered at around 6 months of age, and before they start to show signs of aggression.

Aggression is a learned behaviour which can't be entirely resolved by neutering dogs.

If the main reason for neutering your dog is his (or her) aggressive behaviour with other dogs, you may be disappointed. Ask your vet for advice. He may refer you to a good behavioural dog trainer.

Castration will stop the production of testosterone, but it could take a couple of months for the testosterone production to come to a standstill. Only then will you see any real results.

And don't expect too much change in your dog's 'temperament' if he's castrated when he's an adult dog. In my (unqualified) opinion, a male dog needs to be castrated before or as he's reaching adolescence in order to fully benefit from being neutered. Your vet will be able to advise you more and let you know when it's the right time for your dog.

Fear Based Aggression: If your dog’s aggression stems from fear rather than being testosterone based, then castration is unlikely to have any effect. If you think your dog's aggression is fear based, I strongly recommend you work with a dog behaviour therapist; don't try to work on your pet's aggression problem alone.


Best Time To Neuter A Dog?

When is the ideal time for neutering dogs? I think this question is always best answered by your vet, but generally it's as follows:

Many vets won’t castrate a dog less than 6 months of age. 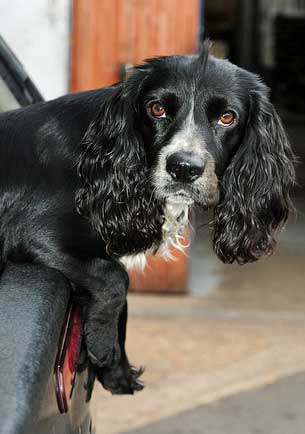 They believe that the dog should be allowed to mature to the stage where his testicles have dropped, usually at between 6 to 9 months of age.

Castrating your dog during this time is generally recommended for a better chance of avoiding dominant male behaviours becoming habitual and to help prevent problems with aggressive behaviour.

Some vets recommend that females should be allowed to have at least one season, or a litter of puppies, and then wait for a few months to allow her body to recover before spaying.

Others fiercely maintain that females don't need to produce a litter of puppies before spaying.

I'm not a vet, but I don't believe that a female puppy needs to have a litter before being spayed. Once the operation is completed, the hormones that would have triggered her desire/need to mate will no longer be produced.

However, the best person to advise you about your pet is your own vet.

He or she will know what's best for you and your dog, so before you make any decisions about neutering your dog please consult your vet.

Neutering Dogs May Affect Their Coat

The process of neutering dogs could affect their beautiful coat.

Some Cocker Spaniels can lose their silky top coat after being neutered; what was once a fine silky top layer can turn into something resembling cotton wool.

Because of this show dogs are not normally neutered.

Max was castrated when he was 2 years old. (If I had the time all over again, I would have him castrated at around 6 months of age, but that’s another story!). Two months later I was certain he was going to keep his lovely silky topcoat as it showed no signs of losing its glossiness.

However, around four months after the operation his coat began to look like teddy-bear fur. It was very difficult to brush and seemed to mat easily - eventually I had to have him clipped.

I was so disappointed at the time because I’d had him hand-stripped since he was a puppy and he was looking beautiful. However; I don't even notice it now - he's still my baby and I love him just as he is - I still think he's beautiful!

If you only need one good reason for neutering dogs - this is it!

There are millions of unwanted puppies born worldwide each year and unfortunately some end up on the street as strays, others are drowned at birth, and many end up in Cocker Spaniel rescue centres or animal shelters where they will be cared for until they can be re-housed.

Thankfully, dog adoption is on the increase and some of the lucky ones will soon be adopted into good homes, but there are many that aren't so lucky and adoption centres are straining at the seams.

Having your dog neutered shows that you are a responsible pet owner and is an effective way of helping to control the ever-growing problem of unwanted or abandoned puppies.

If you only needed one good reason for neutering dogs, this is probably it!

There are a few myths surrounding the subject of neutering dogs. Let's set the record straight.

Think Neutering Your Dog Costs Too Much?

Spay USA are dedicated to ending the suffering of dogs and cats by reducing the number of unwanted births and will help you to find affordable spay/neuter services in a location near you, if you live in the USA – just follow the link.

For our UK visitors, the Dogs Trust offers low cost neutering to anyone on means-tested state benefit.

The RSPCA has many surgeries in the UK and low cost treatment for many basic procedures. Neutering dogs is one of them.

In summary, having your dog neutered can lead to a more healthy life for your pet and can help him to live longer.

Generally, neutered dogs are often more affectionate and less likely to display unwanted behaviours such as fighting, roaming, and mounting.

For me, one of the most rewarding benefits of neutering dogs is that in doing so we are working toward reducing the number of dogs and puppies that end up being euthanized each year.

Don’t make the mistake I made and leave it too late otherwise neutering may not have an adequate affect on undesirable behaviours. Have your pet neutered as soon as he or she is mature enough, but as always, speak to your vet and listen to his or her advice.

One of our visitor's asks whether or not neutering will alter his dog's personality.

Neutering Dogs: Will This Procedure Change Him?

It's very difficult to say with any real conviction because all dogs 'react' differently to the procedure, and for many reasons. (Too many to go into here).

And, I guess it also depends on why you're having him castrated now, at 7 years old. Is there a particular reason for it? You say he's mild mannered, so he's not showing aggression. (That's one of the main reasons owners have their dogs neutered, but it's not always the right solution).

Is he having any health problems? Has your vet advised this procedure? If he has, I recommend you take it.

If you've not spoken to your vet about having your dog neutered, perhaps you should? Your vet will be able to explain to you the benefits (and pitfalls) of neutering your pet, and reassure you about the procedure and possible changes in your dog and his behaviour - if any!

Neutering your Cocker Spaniel may prolong his life by preventing testicular cancers, and his mental state may be calmer if he's not 'worrying' about bitches in heat. The texture of his coat may change, although that's not always the case. As I said earlier, it very much depends on the individual dog.

Your vet will likely know your Cocker well, and it's always better to speak to your vet before making any decision about your pet's health.

If you enjoyed this page, please click on the 'Like' button below and tell your friends about us. Thank you.

If you have a comment or you'd like to ask a question about what you've just read, please have your say below. Looking forward to hearing from you soon!